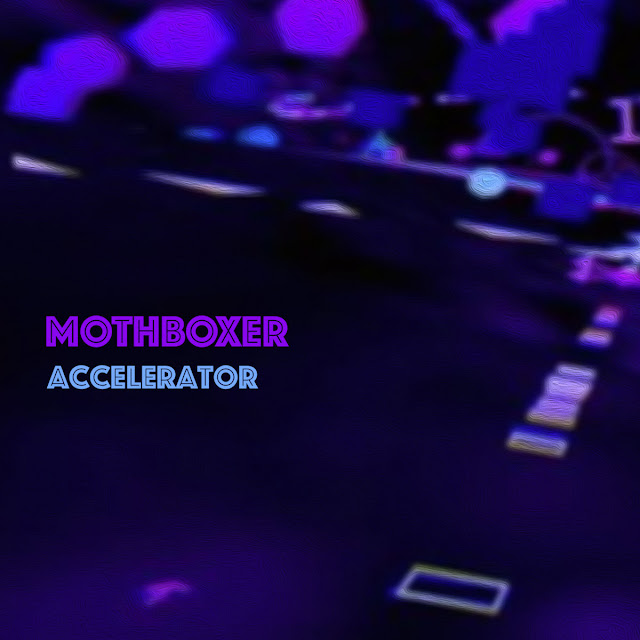 I Don't Hear A Single has been a been a long time admirer of Dave Ody's Mothboxer. The emphasis of a Mothboxer Album is always great Pop Rock. Songs feature unusual arrangements combined with big choruses and some stunning playing. Accelerator is no exception. It is a fine new album with a tad more emphasis on the Pop this time round.

You can read Mick's 2018 IDHAS Interview with Dave here. I also asked Dave if he would give us a track by track rundown of Accelerator and I'm delighted to say he agreed. You can listen to and buy the album (at a bargain price) here.

"This was inspired lyrically after a particularly horrific drive back from London one day.. Sat Nav app was being very efficient (it thought) by taking me off the beaten track and through single track lanes in pitch black to avoid the motorway congestion!

Not the most rock and roll of lyrical themes, but I figured most people can relate to this :) - Musically this came together pretty quickly. I’d named the album before writing this one but “Accelerator” slotted very nicely into the chorus hook."

"Got a little dark on this one - seems to approach the day to day struggle we all have balancing work/life. I try not to make lyrics too whiny usually. Hence the opening line of “Don’t mean to complain”"

"This started life as an instrumental  - Tried many different approaches vocally before landing on the version presented here. I’ll be honest, this didn’t feel like a traditional Mothboxer track for a long while (it’d been hanging around in one form or another since before Open Sky..)

It’s got a distinctly Caribbean feel to the chorus, which may have come from listening to mid era Grateful Dead around the time of writing! It was one of those tracks that kept popping into my head, so I took the bull by the horns and finished it! Certainly one of the more “pop” tracks on the record."

Under Water/Dry As A Bone:

"Sticking these two together as they segue into each other and thematically are pretty similar - Under Water was written after a short period of feeling “under the weather”. Pretty apt for the way the world is feeling right now..! I had the chorus first for this and was pretty pleased with the outcome!

Into Dry as a Bone. Ok, its another whinge.. This is basically about the dirge of the day to day jobs we all have to do (unless you’re very lucky) - So, please buy the albums, so I don’t have to do things I don’t want !! :)

Pretty riff heavy monster this, went back to my rock roots fully here."

"My favourite song on this album currently (that changes daily, but it’s this at the time of writing)

In fact, this could potentially be a single at some stage as it has a very pertinent chorus for these crazy times, even though it was written in the summer last year! I was really pleased with the change from a minor key verse into a very major key singalong chorus!"

Lyrically approaches the theme of contemplating doing all the things that I’ve thought about doing, but not actually getting around to doing them! Another familiar theme for a lot of people :)

Have been getting into synthesis lately and this is a great track to play around with sonics and lush synth pads :)"


Tell Me What To Say:


"Unusually an 80’s vibe to this. I was never a huge fan of the synth pop movement in the 80’s - it all sounded too unreal and not organic enough for me. I always preferred to hear the human element in recorded music (mistakes and all!)

Having said that, there are some classic examples of when it works - particularly in the mid 80’s output of bands like Talk Talk, although they became one of the most organic sounding bands in history in the late 80’s with the sublime Spirit of Eden and Laughing Stock, their early stuff is very synth based and very clever."

"I like this one! Pretty much two different songs welded together with string and superglue.Pleased with how it came out though - bit of a nod to Progressive rock time signatures, but I wanted to keep it fairly concise :)

Another one with the vague theme of futile working towards an ever moving goal.. Bit gloomy but hey, it’s not all roses and puppies out there!"


Funny How It Is

"Onto a much cheerier track! This is a bit of a good time romp with dumb but fun guitar chords leading the way! Also contains one of the bounciest guitar solo’s I’ve played in a while.

Written about looking back on previous musical ventures (the old band) and probably unconsciously appeared in my mind after doing the Time Capsule project."

"This is the newest track on the album, written in January this year.

I try not to get social/political in my lyrics but this is the closest I’ve got to a commentary on the state of the world currently.  Let’s see if you can guess who the “Crazy guy” is? Musically, I’m really proud of this one and the song came together very quickly, which is always nice :)"


"Finally, this is the oldest track on the record. This has been kicking around since the Secret Art record from 2017. It’s a bit of a departure sonically from the rest of the album but I think it sits nicely at the end to bliss you out :)

Lyrically dealing with the loss of loved ones over the years and the knowledge that they are still with us in some form or other."

A reminder that you can listen to and buy the album here.