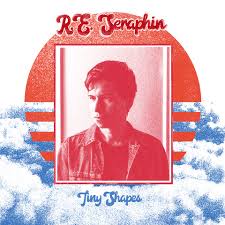 In those hazy days of Anything Should Happen, we used to worship The Feelies. Since then, they've been well off my radar, I suppose mainly because of a concentration on the new. However, I still can't think of a band as good at appearing ramshackle on the outside, whilst throwing out great messy pop hooks. Although most point to Crazy Rhythms as their best album, my favourite as always been 1986's The Good Earth.

Why do I mention The Feelies? Well that's because Tiny Shapes reminds me so much of the band and that particular album. Seraphin did a fine job in Talkies and this solo album sounds like a natural progression with far more emphasis on lo-fi Jangle.


The laid back vocal suits the material perfectly and the Talkies connection is still there as the trio consist of Owen Kelley and Phil Lantz from the band, but there is far more of a Paisley Pop hint. Indeed, the album feels very Guided By Voices.

Kicking off with the Jangling chirpiness of Today Will Be Kind which is all Glasgow C86 and a potential killer single. The album progresses in a much deeper direction, culminating in the killer riff on Hear Me Out.


There are plenty of hints of UK Glam Rock too, particularly on Bend and Exploding Hell is probably the best Feelies song that they never wrote. The stand out though is the magnificent Streetlight with its cocky verse, hypnotic riff and great closing solo.

Seraphin's vocal is somewhere between Marc Bolan and Lou Reed and this tempers what could be a more aggressive with a shoutier singer. Tiny Shapes is a cracker of an album. It feels ideally suited to the Paisley Shirt label. It is an absolute bargain for 3 dollars.


You can buy the cassette and the download and also listen to the album here.

Posted by Anything Should Happen at 14:58