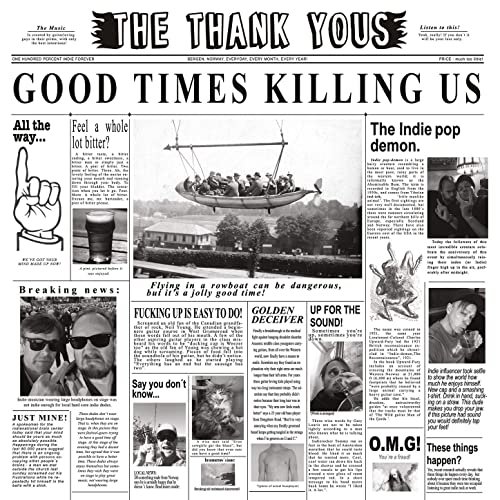 It is lovely to hear something with a big foot in Power Pop and Norway's The Thank Yous have come up with a crackerjack of an album. Power Pop as a genre hasn't had a good 12 months. It has always divided potential inclusive musicians, half of whom think the label as derogatory and most people have no clue what it is.

Things have been made worse by the constant nonsense on Facebook Forums from established fans who still hanker for Badfinger and Raspberries and tell everyone else quite forcefully that all new music is crap and have great pleasure in destroying any newbie's opinion. Add to this the departure of writers who were admirers of the genre as they moved into less angsty areas and bands desperately avoiding the tag.

Long time advocates and supposed Power Pop Influencers have also seemingly gone off the rails, determined to spend most of their time explaining how they are right and everyone else is wrong. I Don't Hear A Single used to cover a lot of Power Pop and it is still something that I love, but this has diminished over the nigh on four years it has been active. Great new releases, therefore, have been few on the ground this year, although with the likes of  Nick Piunti's new album in the pipeline that may change.

So after all that negativity, it is wonderful to hear an album that fits into the category. Whilst Good Times Killing Us is great Guitar Pop, it doesn't dwell in the I Love You, Yes I Do cliches and that means enormous credit should be awarded to Lars Lundevall and Peter Folkedal. This isn't an album of just jingle jangle, there is a real crunch at times, particularly on the Guitar Solos.


Fucking Up Is Easy To Do is very much in Teenage Fanclub territory, the riff and solo remind me a lot of Everything Flows, but the verse has a great Tom Petty drawl. It is that crunch that perfects the album and will appeal to more than just Melodic Pop lovers. The Indiepop Dream is a paean to Brian Wilson and Brian Jones, but done as a sort of UK New Wave single of the late 70s.

Up For The Sound is a slow 12 Bar shuffle, bordering on a crooning Dr Feelgood and These Things Happen offers up trademark Power Pop Jangle, has a singalong Brit Pop chorus and launches into a fantastic solo. Say You Don't Know is a splendid slice of  trippy West Coast Pop.

The album is at its best though when it cuts loose a little and the opener Just Mine does this beautifully. The Bass into lulls you into a full sense of security, gently building up to a searing close. Then there is All The Way, which is probably the album's standout song. It is a great late 60s / Mid 70s R and B cracker with an AOR chorus and again a killer Classic Rock solo.

The album was due to be released on 27 March, but has been delayed until 30 April due to the Corona Virus. A New Single will be released on 15 April. You can pre-order the CD or Vinyl here.

Email ThisBlogThis!Share to TwitterShare to FacebookShare to Pinterest
Labels: The Thank Yous