Spygenius - Man On The Sea 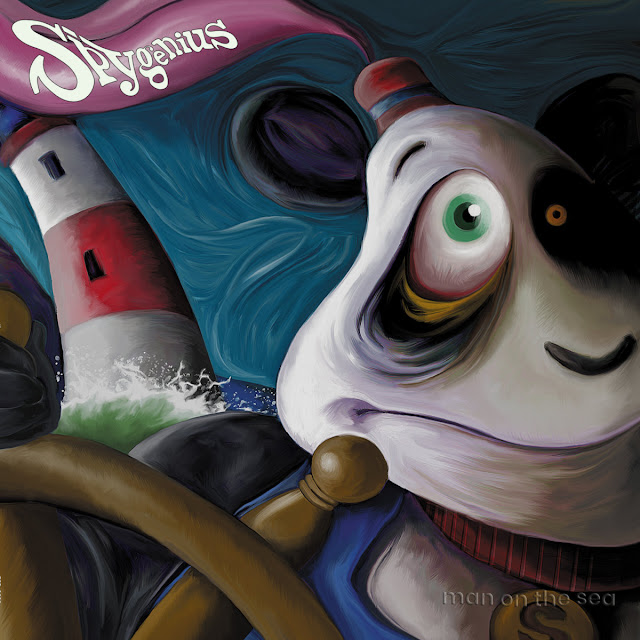 
Diehard Beatle-Geeks agree on most, Beatle-related things. Stuff like: Phil Spector overcooked “Let it Be” a bit, Ringo was ace and “Revolver” is better than “Sgt Pepper’s…”, you know, that sort of thing. However, when it comes to “The White Album”, if you ask ten Beatles fans about it, you’ll get twenty opinions. Broadly, they tend to agree that it should have been a single record, but they can’t agree on what material they would jettison.

“Revolution 9” is a popular choice for the posthumous out-takes album, but after that, all bets are off. It’s surprising how heated (and violent) a debate about “The Continuing Story of Bungalow Bill” can become. I’d love to think that in twenty years’ time, pubs full of aging Spygenius nerds will get all uppity about “Man On The Sea” and what should or shouldn’t be on it. Double albums can bring out the worst in people, especially the people who recorded them.

“Pacephale” was always going to be a hard act to follow, being a pretty much flawless masterclass in how to make a modern pop-rock record. For “Man on the Sea”, the band took the decision to ransack their cupboards, plunder stuff which had fallen down the backs of radiators and generally record every unreleased song of theirs that they could lay their hands on.

This means that for the next record, they’ll have to come up with 100% new material – no more relying on gems from principal songwriter Peter Watts’s expansive back catalogue. A brave, if slightly terrifying approach, I’m sure you’ll agree. This exhaustive trawl means that “Man on the Sea” has swollen to a double album, but the good news is, that it survives the inflation, but there is a little collateral damage.


Spygenius are all about the details. Whether it’s punning word play, baffling in-jokes or a plethora of pop-culture references. When you listen to a Spygenius record, you’ll need your wits about you and Wikipedia within easy reach. The album opens with a snatch of “La Marseillaise” (presumably, a tip of the hat to “All You Need is Love”), combined with the theme tune from “Steptoe and Son” – and that’s before the first tune starts. Fortunately, “Another True Story” will turn your bemusement into smiles, as it’s nearly five minutes of joyful, 12 string Jangle Pop. As opening statements go, it’s a bold one.

Don’t get too comfy dear listener, as track two; “Albion”, reeks of “Liege and Lief” era Fairport Convention, but with a more forceful rhythm section and a bit of cool jazz thrown in. It works really well, by the way… That folk influence pops up all over “Man on the Sea”, sometimes in Watts’ vocal delivery and sometimes in the Byrdsy ringing of the ubiquitous 12 string guitar. You’d expect a tune called “If You Go A-Roving” to be pretty folky though, wouldn’t you? Well it isn’t.

A handful of tracks sound a lot like they’re from the album REM would have made between “Reckoning” and “Fables…”, if they’d been from Canterbury and one of them was a woman. “Salaud Days”, “Watch Your Back” and “New Street” are grade-A, paisley-pop gems, which whiz past your ears in a delightful fashion, begging to be replayed. It’s these lean, all-killer-no-filler tunes which show up the band’s tendency to over-reach on some parts of “Man on the Sea.”

“Tomorrowland”, “Man Overboard” and “Dolphinarium 1986” would benefit from either a bit of judicious editing or being sequenced further apart on the record to avoid the dreaded “double album dip” which tends to occur on sides two and three of a two album set. I can’t decide if “Green Eyed Monster” is a brilliant mixture of prog rock and pop or just a repository for a handful of orphaned bits of tunes. This means it’ll probably end up being my favourite track.

There aren’t any bad things on “Man on the Sea”, there are just a few things which aren’t as good as some of the other things on the record. From the amiable, banjo-led plod of “Midnight Bandola” to the early eighties, agit-pop of “Spite” (sung beautifully by Ruth Rogers, whose basswork is also exemplary throughout the record), there’s a trailerful of goodness here. Watt’s lyrics are worth the purchase price on their own and if you hear a song this year with a better opening line than, “Don’t blame it on your mother / She can’t help being stupider than you”, I will be very surprised.

When you’ve had your fill of the Neil Innes inspired wordplay, you can have fun playing “spot the reference” – for example, check out the New Seekers-style harmonies on “Tomorrowland” and the tip of the hat to Morecambe and Wise on “Remember Me When I was Good.” There are others, but I can’t access Wikipedia at the moment.

“Man on the Sea” is an ambitious record that hits the vast majority of what it aims for. When it’s good, its damn-near brilliant. When it’s less than good, it’s only very slightly less than good. Maybe, if they had a cigar chewing manager with his eye on the clock and both hands on his wallet, some of the excesses may have been nipped in the bud. But as with all these multi-album sets, the point is most definitely moot. One thing is for sure…people should leave “The White Album” alone – it’s perfect as it is.


You can listen to and buy the album here or here. Ian's IDHAS interview with the band can be read here.