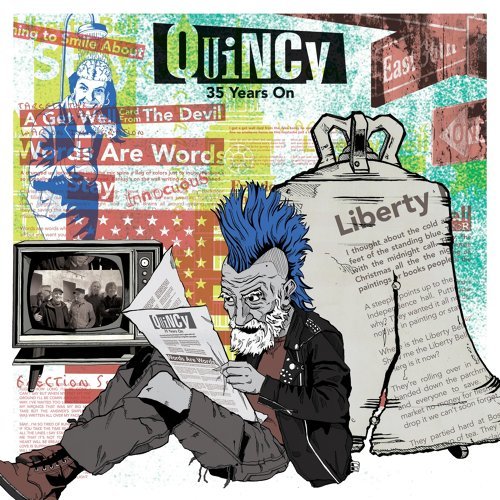 Whilst listening to the new releases, I'm also trying to catch up with 2020 releases that I haven't covered on IDHAS yet. One such example of the latter is this excellent Kool Kat release from one of the great lost US bands.

Quincy signed a massive deal with Columbia in 1980 and were due to hit pay dirt. Only the debut album appeared under the name Quincy and after a lawsuit from Quincy Jones about the band name, a 1983 EP followed with a name change to Lulu Temple.


Those who know, know that Steve Butler and Wally Smith went on to form I Don't Hear A Single favourites, Smash Palace, so all was not lost. This reformation of Quincy, 35 years on really works. It is quite short but incredibly sweet.

I can generally take or, most often, leave Reunion albums, they are more for nostalgia and can usually never be as good as you remember when you were young and green. However this really really good. It is a melodic harmonic treat whilst being different to what the band were initially about.


Liberty Bell is a jangling joy, Something To Smile About is very much in the territory of The Cars and Innocuous borders on Rock And Roll, hints of Rockpile. The band also get to travel in the direction of The Kinks with A Get Well Card From The Devil.

Words Are Words and the superb, Stay are both fine examples of UK Stiff or Costello New Wave, even more interesting with the band being American. Quincy were CBGB's stalwarts and the last two tracks are live from a 1979 show at the venue. Always In The News is another New Wave romp, whilst Privileged Few has Dr Feelgood and early XTC overtones. Highly Recommended!