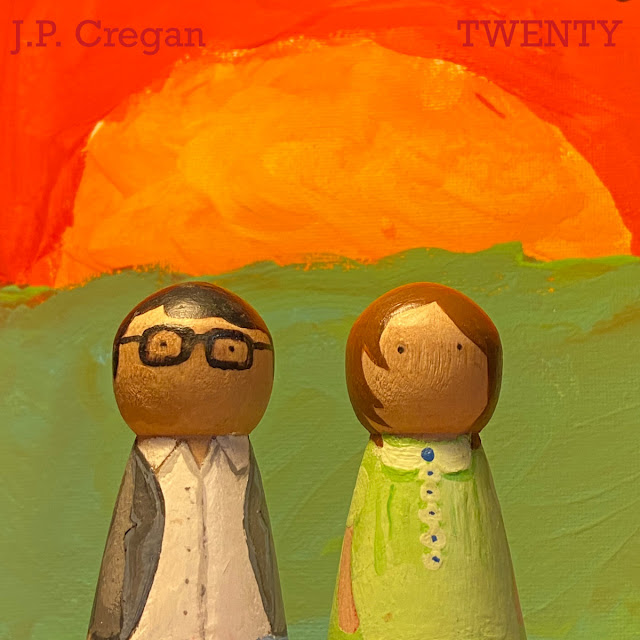 The third album from Los Angeles's J.P. Cregan is an auto-biographical affair celebrating his 20th Wedding Anniversary. Now if that sounds a bit twee, it's because it is, but affectionately so. What Twenty is is a great solo Power Pop album released in a year when there haven't been too many.

I'm not sure if Power Pop's internal arguments have caused this. I certainly am guilty of calling out the all new power pop is crap brigade and there's still an element around of they are no Badfinger / Raspberries are they? So it is particularly refreshing to listen to an album like this.

There are no crashing guitars or big riffs present here, just well written and arranged songs. All have hooks that come from different directions and most importantly everything sounds so wonderfully chipper. The world seems a bit happier after you listen to Twenty and isn't that what music should be about?

Cregan's vocal is very reminiscent of Mental As Anything. The choruses aren't as big, but the content is far superior and the songs have a much more lasting hold. There is also a real strength in the arrangements. Melody is at the forefront and hooks and solos are never longer than they need to be.

Without ever seeking lyrical depth or wanting to, you are drawn in because the songs are just so damn great. "Love, Supplied" is a cracker, led by a sort of Pub Piano and with a Gilbert O'Sullivan feel. It is the album's big number and crams tons into four and a half minutes.

History Of Man is a stomper with a killer hook and In California is my personal favourite, Pop at the core with a country ballad bursting to get out. You'll hear this on a future Audio Extravaganza. There really is so much here to recommend. A real feel good album. Highly Recommended!

You can feel even better because Twent is available at Name Your Price on Bandcamp. You can listen to and buy the album here.

Posted by Anything Should Happen at 18:20