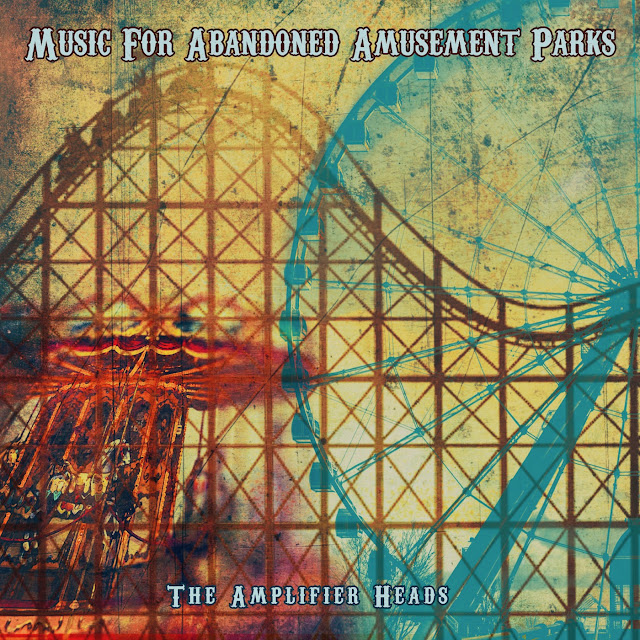 Boston's Sal Baglio may be rightly largely known for his adventures in The Stompers, but it is his solo adventures as The Amplifier Heads that appeal to IDHAS most. The man is inventively prolific. You never know what to expect, but whatever it is is wonderful.

His previous album to this, Sonic Doom was a marvellous collection of  lo fi recordings that would have been lauded by all if it was recorded by a 20 odd year old Indie Bedroom kid. Everything that I admire about Baglio was present. 25 songs, every one different, out Newelling Martin, Partridging

The outburst of ideas means there has already been an EP before this and an EP since, despite this album only being released this month. Here he returns to a more defined Pop. Music For Abandoned Amusement Parks is a concept album, but that doesn't mean wanky pretentiousness. This is an album that stands up in its own right.

The title gives away the subject, but more relevant is the underlying theme of lost youth and the Now v Then. There is plenty of the straight forward here. Funhouse Mirrors is American Graffiti, Candy Apple Girl is country yee haw and Ghost Song is gentle melodic Jangle.

Even in this pop laden first half, there's also room for two instrumentals, one a tumbleweed weeper, the other a summer gone affair. It is the Indie Rock that delights IDHAS most. Song For Abandoned Amusement Parks is the nearest that you will get to XTC without being XTC, Freaks is a freak out, very Guided By Voices.

Welcome To Deathworld is so Cleaners From Venus, Black Mascara could easily be on a David Lynch soundtrack and Freaks is a moody, Johnny Cash like, ending of despair. Freaks is so out of tune with the rest of the album, beautifully so.

There's still time for the running title track theme to morph into a five minute finale to end a wonderful trip. The beauty of Baglio's work is that he never overdoes anything. Every idea is a say whay you want to say and get off. There is so much variation here, but this is packed into 36 minutes. There is no turning three minute songs into seven, they stay at three minutes.

I can't recommend this album highly enough. I could say that this is the best thing that has ever appeared under The Amplifiers Head banner, but that would be just until the next one. Well done that Man! You can listen to and buy the album here.

Posted by Anything Should Happen at 22:03

Email ThisBlogThis!Share to TwitterShare to FacebookShare to Pinterest
Labels: The Amplifier Heads