The Overtures - Once In A World 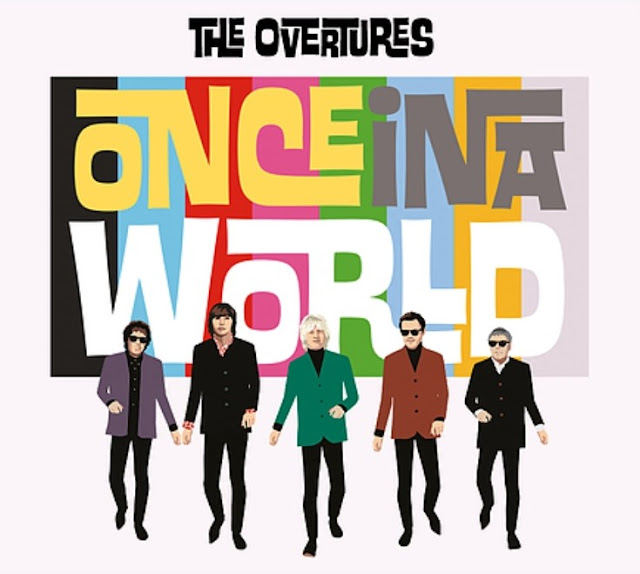 Being so close to Liverpool, I come across a lot of  Merseybeat /  early Beatles cover bands and so they become just a tad tedious. However, The Overtures are on a different level to the meat and potatoes of every day outfits, in that they are fantastic at what they do. Covering the gamut of 60's UK Beat, their shows are a fun packed, singalong , nostalgic pleasure. They master the genre.

They've also overcome another problem here. In the band's fourth decade, they release their first album of original songs and it is really rather good. The problem when artists write their own songs in this style, they come across in one of two ways or even worse, both. Songs can either be so cliched, like for instance The Tearaways who seem to be covering the whole range of artists or genres for their song titles.

The other problem can be image.  Suit, Beatles Haircut, Rickenbacker in hand, perma-smile from the likes of Johnathan Pushkar just become a yawn fest leading to Karaoke Beatles comparisons. Thankfully, this UK five piece have avoided both issues. This is a really pleasant listen, beautifully executed and professionally done.

This is helped by the vocalist and songwriter being Den Pugsley from one of the most underrated 80's Power Pop bands, The Pencils. There's a lot of jangle here and it is really good. At times I'm reminded of The Searchers a lot, but even more of Liverpool Express.

The band master that early to mid 60's sound, but they are even better when they veer from that course. Still On The Mind is a beat driven, brass accompanied joy, Red Dolls House is a cracking slice of 60's Beat and the stand out, Watching The Grass Grow is a wonderful Toytown Psych Pop affair. The latter really is a revelation.

I approached the album with trepidation, thinking that I knew exactly what I was gonna get. I deserve a slap for my prejudice. Well done The Overtures, this is a great listen. Few can do this type of stuff this well.

You can buy the album at the band's website here or from Ray at Kool Kat here.

Posted by Anything Should Happen at 10:23

Email ThisBlogThis!Share to TwitterShare to FacebookShare to Pinterest
Labels: The Overtures