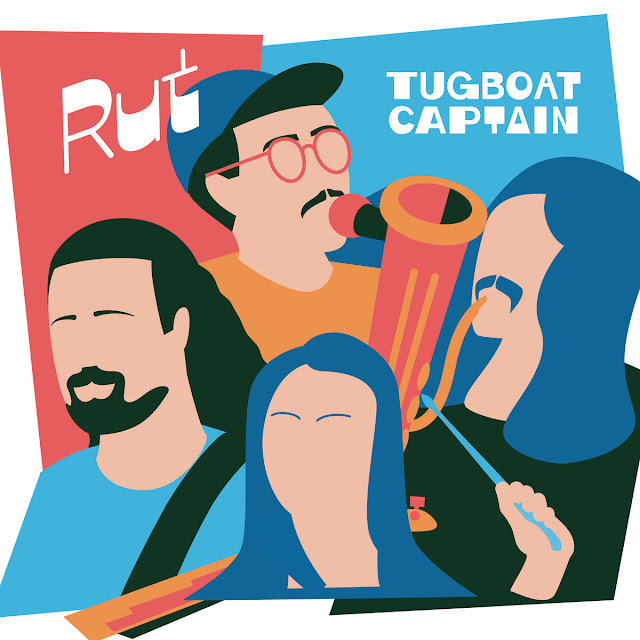 This year has obviously been different to other ones, but I've also never known a year for offering up surprises. Out of the ether, magnificent albums explode and here is another. On first listen, I felt like I did when I heard the Paul Malloy album and that's been the most popular review on here this year thus far.

So it seems fitting that the first review of this one a day for October features Tugboat Captain. Although this month is largely a catch up for IDHAS, this is an album that isn't released for another fortnight, but it is simply too good to miss out pre-ordering. Rut is beautifully arranged with so much in it, awash with variation, an incredible debut studio album.

This no basic lockdown affair. Partially recorded at Abbey Road, the band are aided by eight additional  vocalists and 13 additional musicians providing Strings, Brass, Woodwind and Percussion. There is also an 11 piece choir present. All this adds to the soundscape, but doesn't distract from the quality of the songwriting.

So where do you start in describing the content here. It's really hard because there is so much variety here from the London quartet. Essentially this is a Pop Rock record, but that description does it little justice. The feel is very Psych Pop or Chamber Pop, but there is also Folk, Glam, Brit Pop and even showtime influences. I also hear so many front loaded albums these days, that I'm happy to report that the best song here may be the last.

If Tomorrow's Like Today is all jaunty, very Divine Comedy ish and Figure It Out is a heady mix of Glam Rock and late 60's Flower Power with added ELO style harmonies. Check Ur Health is all Toytown whilst Downward Slope is a delightful storytelling affair. Damned Right is like one of those great Pop Rock singles from the 70's with a superb, |Peter Skellern like, Brass accompaniment.

Rut...Waking Hour is two songs in one. The first half is all acoustic Al Stewart, the second half oozes Brit Pop. Stripped down, the band are just as good, Everything About You is all Lloyd Cole, You can make your own minds up about the two singles embedded here. However, I have to add that Day To Day is the best thing that you may hear this week.

It is also fabulous that the album is released on Glasgow's Double-A Side Records. There is something wonderful about an album with a sound this big being releases on a small independent |DIY label. I'd add that the two tracks that are playable on the Bandcamp site are ace, but there is so much more on the album.

Rut is released on 16 October. You can pre-order it here.

Posted by Anything Should Happen at 19:28