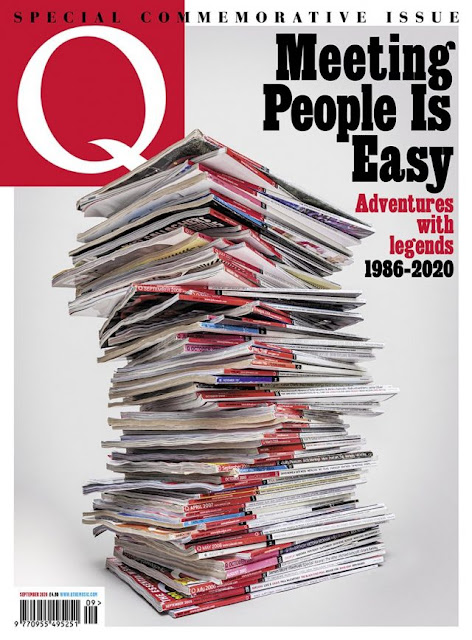 There seems to be a fair amount of gloating about the demise of Q. Some of the comment is valid, but much isn't. It is the opinion of most people that a magazine is rubbish because it doesn't cover the bands that you like and when could it ever please everyone or indeed anyone. True it was Gallagher obsessed and no band divides opinion like Oasis. But it was what the people who bought it wanted to read, so why wouldn't you aim at that market? There is no difference to Uncut and Mojo's coverage of Paul Weller, Bob Dylan and The Beatles.

Those people who did buy it became less and less as the internet allowed you to read about all things Liam from around the world, without paying. But why dance on its grave? Likewise, there is a fair bit of misty eyed nonsense about how badly music is served now via print, radio and TV, but you can't change change. Digital changed everything as I know from my time in the Photographic Industry in the 90's. Yes Covid finished it but the writing has always been on the wall.

People don't buy magazines anymore, smartphones have changed the reading on Public Transport and why would you pay a fiver to read something with little interest to you, Particularly, when you could read about bands you did like for free. There is still room for a magazine covering music, because although the Internet is fine and dandy, you only tend to find what you are looking for, it isn't great searching for the new to you in Google.

There are ways, particularly following the playlists or writing of people whose opinion that you respect and that for me was the problem with Q Magazine. I stopped reading it in the Noughties, not because it didn't cover all the music that I like, but because it seemed to become advertiser led. The beauty of Q was that it always gave an honest opinion on an album. You may not like it, but the opinion seemed honest. It seemed to shift into an era of not criticising albums that were paying for advertising. The interviews got less interesting too, more PR led than revelatory.

Q was a revelation when it started in 1986. Remember music was not easy to discover, you relied on the media in whatever form. It was refreshing to read well written articles that had length and you became encaptivated reading about an artist that you didn't particularly like due to the quality of the writing. In truth, of the three big Magazine launches, Q wasn't the best. Vox was far more interesting content wise, Select had more in depth articles until it went all too kool for skool in the 90's. But Q had a great mix and the best review section.

In the 90's Q excelled. It had a mix of great pin pricking interviews in the front half, combined with its review strength in the back. It was a fun and informative read and was helped along by Brit Pop. Most of that fun eventually went to Word Magazine and that was a fine read until the podcast seemed to take over and that seemed to reveal the writers as a self satisfied Boys Club. Q, though, turned into a what the advertiser wants thing, rather than what the reader wants. It became more like Commercial Radio, Mojo and Uncut also took advantage of their archive in a way that Q never did, The specials produced by Uncut in particular provided financial reward for using old writing. Q tried it for a spell but always seemed to do so in a half hearted way.

There is something sad though about another promoter of music going away from the general market. There is little on TV, music wise now and what is has become threatened. Budget cuts at BBC 4 have left largely repeats and that appears to be next for the chop. Radio has become playlisted hell. Even Internet Radio is shadowed by dodgy playlists that don't rely on talent but dollars. So I don't see any glee in celebrating the loss of the magazine. As I said you can't change change, but you also can't moan the loss of things such as the live scene if you don't bother to attend. Music should not be free, despite most believing that it is.