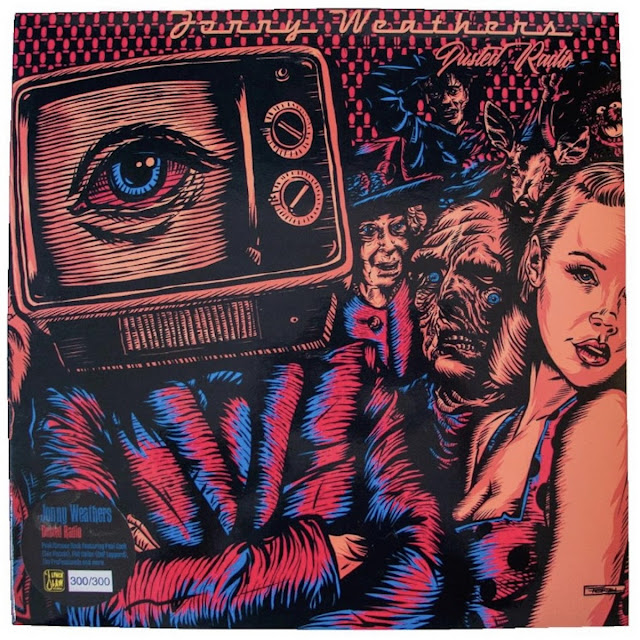 I am a long time fan of Jonny Weathers and I've been waiting for this for quite a while. It has finally been released to the world and so now is the time to tell you about it. With guest appearances from Paul Cook and Phil Collen, this an album to rock your socks off.

The album also coincides with the 31 Reviews In May coming to a close. I'd been listening to so much great melodic guitar pop this month that I wanted to include something with a fair bit of get up and go in it. Dusted Radio is that album, it will blow the cobwebs away and some.

Weathers is a fantastic guitarist that has always seemed to prefer looseness. Well the change here is that there is no slack here. If what went before was Indie Rock, then this is full blown blast out Rock. It is loud and produced in a way to be loud, yet it never forgets the song, even a bit of plank spanking is allowed.

This is a much growlier Weathers vocal. At times, the album gets close to large venue Rock, a real nod to the late 80s. Time Won't Tell Me is closest to Weather's past, a great Pop Rock with a great direction change into a much calmer phase on a couple of occasions.

Radio City is an awesome opener, Cook's drumming is simply awesome. Opium Fireworks is just gripping, fist shaking joy. Indian Rope Tricks starts all INXS before breaking out. How Long Until Its Gone sounds like big Rock from 1971 with an ace riff that is almost Blues Rock.

Soulshine is probably the standout, splendidly addictive, a little bit AOR with a weeping riff. The album caught me by surprise at first, I just didn't expect something so immaculately produced. It's true to say I don't listen too often to Rock these days, Dusted Radio makes me feel I should. The album doesn't come up for air across the 33 minutes. Thankfully!

Posted by Anything Should Happen at 19:32