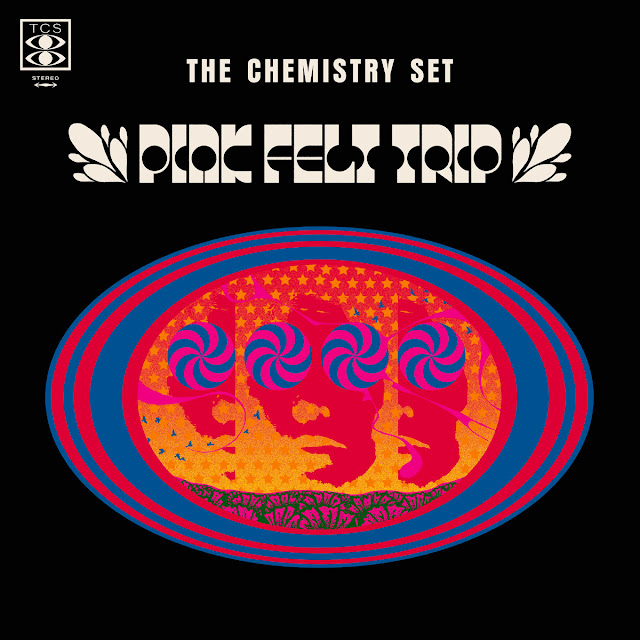 When I tell people that I listen to as much Psych and Prog as Pop Rock, people get all quizzical faced. They forget that I Don't Hear A Single majors on Pop Rock, so that is what you are most likely to see featured. However, whenever an album is released in either of those genres that deserves a wider audience and I think will appeal to followers, I will cover it.

The Chemistry Set are one such band. Dave McLean and Paul Lake are now well into The Chemistry Set's fourth decade and are still just as interesting as those early days. They define Psych and Europe despite their Britishness.

A listen to the first three songs reveals both the variety and sort of trip you are in for. Pink Felt Trip is a fine slice of Space Psych, The Witch is a cover of Mark Fry's 1972 song and ventures deep into Prog. Then there's Lovely Cup Of Tea which is like Madness doing Psych Pop.

Sail Away has a real twang and but for the hippy trippy vibe, could be a Brit Pop song and Legend Of A Mind gives the impression of a gentle LSD Trip, it is like three songs in one, beautifully arranged and uses every second of the six and a half minutes.

Paint Me A Dream wipes the floor with most Psych Pop pretenders, whilst Firefly comes across as a less twee Kula Shaker. Psychotronic Man is a modern day Moody Blues. Then there is The Rubicon is New Wave UK Beat.

Oh and the closing Self Expression Trinity is simply jaw dropping. It is over 11 minutes long and in three parts and contained within is everything that The Chemistry Set excel at. A magnificent soundscape that encompasses Psych, Pop Rock, Prog and all in between. It is a masterpiece.

Pink Felt Trip feels like the most accessible album by the band yet. There is something for everyone. Inventive, melodic and taking unexpected routes, it is an essential listen. It could only appear on Fruits De Mer and of course it does.

You can pre-order the album from Fruits de Mer here.

You can now listen to and buy the download on Bandcamp here. A CD Release will be available via Bandcamp soon.

Email ThisBlogThis!Share to TwitterShare to FacebookShare to Pinterest
Labels: The Chemistry Set