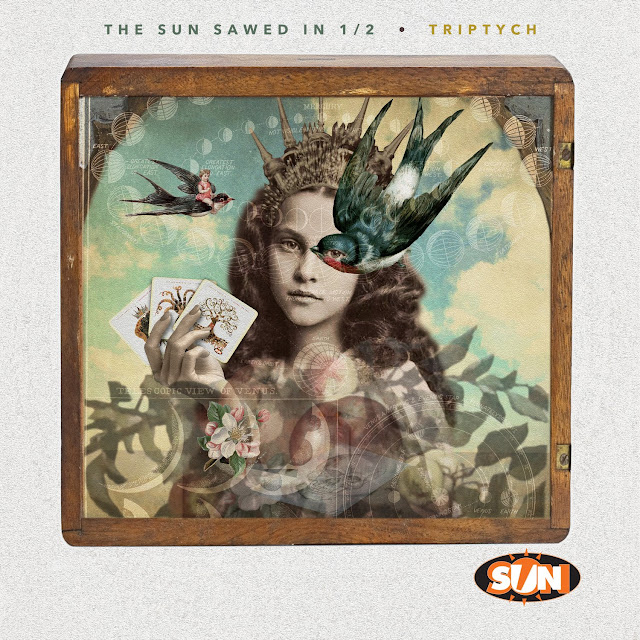 The adventurous Triple project of releases from the splendid The Sun Sawed In 1/2 have been a highlight of my listening activity. Noted as three EPs, all should be more aptly described as mini albums. Now they are combined and released as a 2 CD set with three previously unreleased Bonus Tracks from the sessions.
I've already reviewed the second and third releases. Sirens is here and Before The Fall is here. It doesn't make sense to go over old ground, so I thought I'd tell you why I love the band so much and cover the Beaches In Bali release and of course the three bonus tracks.
Over three decades, the St. Louis Missouri outfit have released eight full length albums as well as the material on Triptych. Starting out as the epitome of a classic Pop Rock group surrounded by similar peers in the 90s, they were the ideal example of a Not Lame label act.
What they have done in more recent times is embrace Modern Pop, working with outside musicians and collaborators from all around the world. Quite a few have tried this direction, Weezer most notably, mostly dismally. It has either been too out of kilter, too forced or just suffering from awful patched together songs.
The Sun Sawed In 1/2 are the only band to master this shift. Partly, because they've never lost sight of their roots and the ability to shift moods and directions in individual songs. It has allowed an appreciation outside the normal (Power Pop) boundaries and different genre fans to meet in the middle.
The opener in this trio, Beaches In Bali contains five very different songs, all linked by wonderful arrangements and melody. The title track here reminds me a lot of City Boy around the time of Dinner At The Ritz. A Beach Boys chorus with a Baroque Pop backing.
Soft Away is almost Easy listening, the sort of thing that would grace a 70s Pop Rock album and even that changes. This time into a funk jazz ending. Dear Always is a lighters out affair, yet Dried Cherry Blossoms is much pacier, all handclaps and chirpiness.
The Good King Of The Summer is the stand out is essentially something that would fit into the Prefab Sprout catalogue, but as with any The Sun Sawed In 1/2 song there are additions. This time there is Brass and a wonderful harmonic end.
The three additional tracks on the double CD don't let the standards drop. Games is a gentler affair but still allows some big vocal harmonies. If Only I Had You is again reminiscent of 70s Pop Rock, but easily be a Broadway Show song. Starling is the real gem, a song that mixes the best of what this band can do, vocal interplay, changes in tempo and a sneaky Guitar solo.
Hopefully whilst reading this, you are left with the impression that this lot are a special band. Extraordinarily modern whilst still allowing themselves to be dated. Vocally, few can touch the arrangements and the direction changes are wonderful. I don't hear a band as inventive that is still around.

Email ThisBlogThis!Share to TwitterShare to FacebookShare to Pinterest
Labels: The Sun Sawed In 1/2