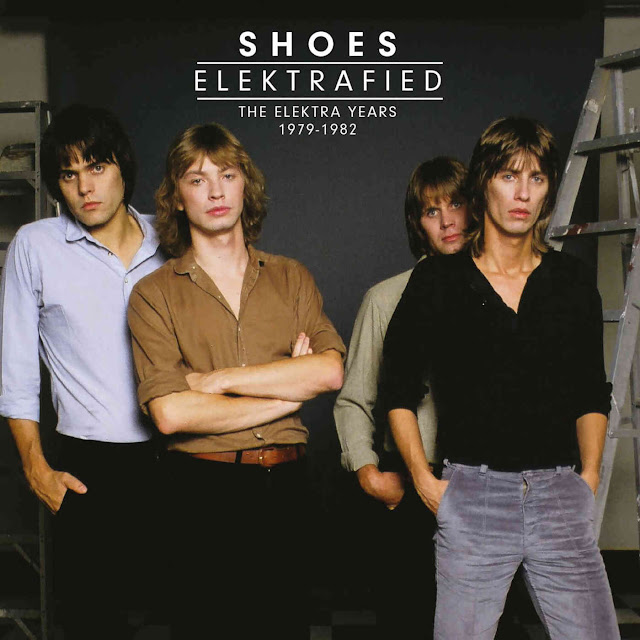 Power Pop musicians are masochists. There, I’ve said it. Why else would anyone slip on some Chuck Taylor’s, strap on a Rickenbacker and then slide gracefully into critical acclaim and poverty simultaneously? How many musicians working in the genre can be considered really successful? I’m sure Rick Nielson has a nice car or two and Norman Blake isn’t shy when it comes to buying a round of drinks, but as for the other big-hitters..................

I’m pretty sure that your postman has a healthier bank balance than they do. If you’d have gone to your career advisor at high school and said “I wanna be the drummer in the Rubinoos”, they would have been on the phone to your parents faster than you can say “intensive child psychology”. So, why do musicians do it to themselves? Ask Shoes…

Everyone who’s reading this will know who Shoes are. If I know one thing, it’s that the readers of this blog know their semi-obscure, late seventies pop-rock. Just in case, you’re here by accident, Shoes were a band from Zion, Illinois who produced a string of decent records which garnered poor to moderate sales.

They were signed to Elektra in that six-month window towards the end of the seventies when it seemed that pop-rock was going to be The Next Big Thing, producing three slick, polished and financially unsuccessful records. Of course, PowerPop aficionados clutch these records tightly to their collective bosoms and get misty eyed at the mere mention of the titles, but are they any good? Fortunately for us, they are. Sort of.

Elektrafied – The Elektra Years 1979-1982, is the latest release in Cherry Red's ongoing trawl through the murky backwaters of rock. It compiles everything they recorded for Elektra - all three albums and a stack of out-takes rarities and floor sweepings that will make your head spin. There’s also a brilliant essay on the band, written by David Wells which adds colour and detail to the story. If you’re a fan, or even a casual observer, you really need to hear this.

There’s a bit of a mystique about Shoes – were they really Power Pop prophets or just an OK pop-rock group? Elektrafied puts forward a strong case for both statements. It’s clear that Elektra didn’t really know how to market the band – torn between forcing them to adopt the white shirt/skinny tie uniform of The Knack or go for the quirky, day-glo look of The Cars. The label decided to let them persevere with the jeans and t-shirt look which the band had been rocking since their inception.

Consequently, their rather anonymous image may have cost them a few front pages in the teen press. The same can also be said for a lot of their music – it falls between edgy new wave and rocking pop in a way that isn’t always satisfying. When it works on tunes like “Tomorrow Night” and “Hate To Run” it’s gorgeous, but a bunch of other songs, don’t quite hit the mark.

Did they have their edge polished off them by the string of top-drawer producers who worked with them? Possibly. There are many tunes on Elektrafied which could have done with a little more grit in the vocal and fuzz on the guitar – compare the demo version of “Burned Out Love” with the way-more-sedate version which was released on “Tongue Twister.” But hindsight turns us all into experts, doesn’t it?

Things could have – no, should have been different for Shoes. There is some great writing here, but sometimes it lacks the urgency and the strident approach which was necessary to make their recordings more convincing. Compare this with the first album by The Records to get an idea of what could be done with this format – while “Shades in Bed” manages to combine the urgency of New Wave with grit, aggression and urgency, Shoes just fall a little short. Having said that, “Shades in Bed” sold next to eff-all as well…

Although, I may have painted a rather negative picture of “Elektrafied,” it’s still a great collection of material by a great band and I’m thrilled that it exists. If you’re expecting something that will usurp “Radio City” from the top of the Power Pop chart, think again. Shoes got close – hell, they even got a cigar, but it was a slim panatela, when it should have been a big ol’ Cuban Belicoso.