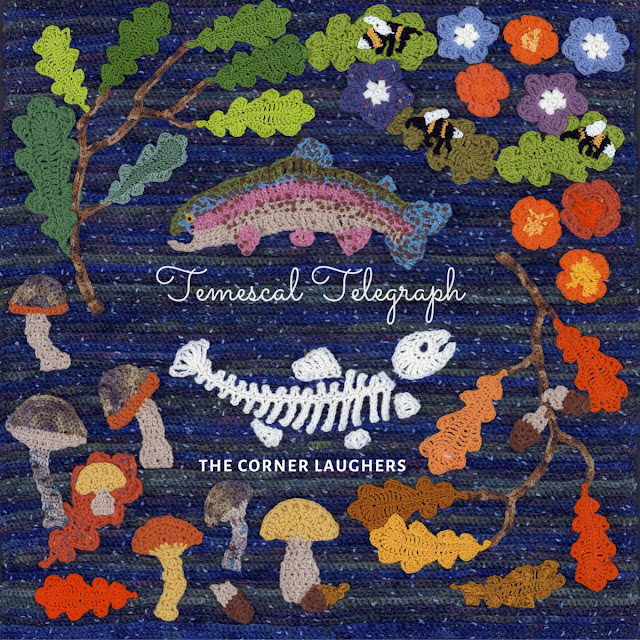 The Corner Laughers are a special band. Karla Kane rightly gets a lot of the main attention, but they are very much the sum of their parts. Khoi Huynh throws up McCartney-esque Basslines and provides a fine rhythm section with drummer, Charlie Crabtree. Meanwhile Guitarist and longtime IDHAS hero, KC Bowman's playing allows the band to genre hop as they do, effortlessly.

Both Huynh and Bowman are both multi instrumentalists which allows a lot of freedom and inventiveness, the latter also recorded and mastered the album. However, it is not just the case of the singer getting the attention, Kane is the songwriter and her Ukelele playing is prevalent. Her sugar sweet voice is all encompassing, coming in somewhere between Rachel Sweet and Kirsty MacColl.

The band are generally hard to pin down sound wise and on their fifth album, their first for Big Stir, this is even more so. You can feel the West Coast air on the songs, but they are also draped in UK Indie, a bit of Americana and some wonderful Psych Pop. There are at times hints of Xtc in Skylarking mode or Robyn Hitchcock, so it makes complete sense that the only cover on the album is written by a Cleaner From Venus.

This versatility is probably best demonstrated by Lomo Alta, which is borders on freeform Jazz. Where as The Calculating Boy is top notch Psych Pop with some fine guitar leads, Sister Of The Pollen could be sung on Ready Steady Go and Wren In The Rain is pure St Etienne. Changeling is Kirsty MacColl borrowing Madness's piano and what a guitar break! It is an absolute gem of a tune.

The Lilac Line has a bass line to die for, enhancing a sort of Americana Pop, this band are so good that they've invented a genre. The Accepted Time is a song for an imaginary film and Skylarks of Britain is an outstanding slice of Canterbury Folk, the band turn into minstrels. Lord Richard comes across like a Robyn Hitchcock song written for The Seekers.

The album is like an IDHAS wish list with appearances from Rex Broome of The Armoires and Bradley Skaught of The Bye Bye Blackbirds. Topped off by a cover of Martin Newell's Goodguy Son, I am a longtime fanboy of the great man. The thing is though that this cover fits the album perfectly.

Getting The Corner Laughers on the label is a massive coup for Big Stir. A label that is the brightest spot of the last decade and is set up to dominate the next decade. Big Stir, despite all the press, were never a Power Pop label and now they have hooked one of the most innovative bands of this century. Temescal Telegraph is an absolute joy. Album Of The Year Material for sure and well worth raiding your purse for.

You can pre-order the album on Bandcamp here or on the Big Stir site here. You can buy the band's back catalogue here.