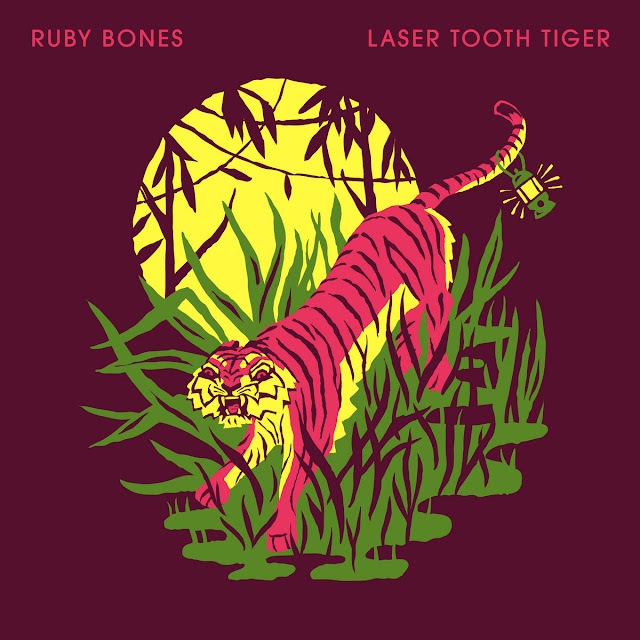 One of the most irritating side issues of the Lockdown has been music that wants to tell you how bad things are. It is all a bit like searching Google for advice about your aches and pains. It doesn't relieve your concerns, it just convinces you that you have Beri Beri.

Things haven't been great, but constantly hearing people moaning about being imprisoned, when they never went out anyway, grates and it is worsened when they decide to write a song about it. You yearn for something positive to listen to and such albums have been in short shrift.

Thank goodness for New Jersey's Ruby Bones. The band's second album is exactly what Pop Rock should be. Optimistic, Chirpy, Joyful Guitar led songs that say look we good do this or soon we will be able to do that. Laser Tooth Tiger is a wonderfully optimistic album that just bounces along.

The album reminds you a lot of the Indie scene of the late 90s / early noughties. The feel is very UK riff led, splendidly so, with all the big choruses. But there are plenty of US references. At times it sounds like a happy version of The Strokes, albeit with a lot more lyrics.

There is a real bounce and pace to the album that just grabs you. You hear bits of Glam Rock, Slacker Pop and much more. The only the time that Ruby Bones slow down is on Talk About, a song that should be coming to a TV Advert near you.

Press Rewind is a Brit Pop anthem of the highest quality, but it is those joyful choruses that hit you most. The likes of Rooftop, Not Enough and Tired Eyes will have your feet tapping furiously and Don't Lose Your Head is everything you could ever want in a Pop Song. Laser Tooth Tiger is Outstanding!

You can listen to and buy the album (for the Bargain Price of $3.50) here.

Posted by Anything Should Happen at 13:36