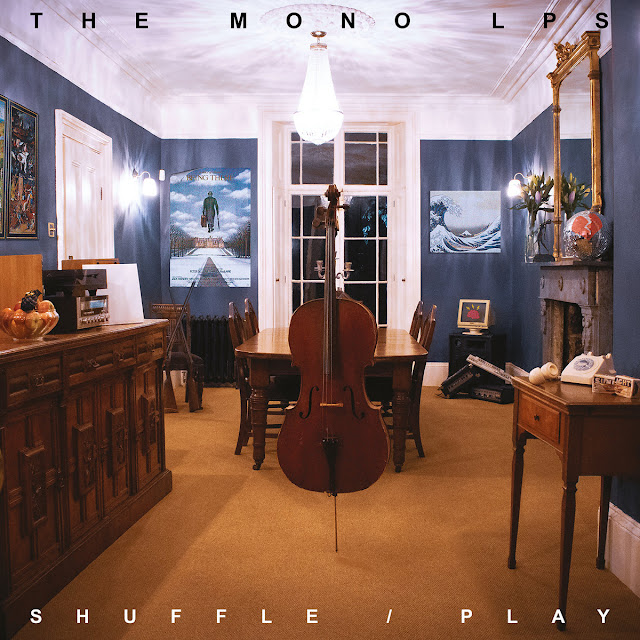 It was during the first few months of I Don't Hear A Single that I reviewed The Mono LPs State Of Decay. You can read that review here. I knew that the follow up would be something special, I just didn't expect it to be five years later.

Since then I've discovered another rock and roll band with a cello, although The Happy Fits inhabit very different territory to The Mono LPs. On listening to Shuffle / Play, they've also moved from being the best band In Liverpool to the best in the UK and now seem ready to take on the world.

The album seems much deeper and varied than State Of Decay. Ste Reid sounds less like Dave McCabe, although you can still find some comparison and the whole album is less in your face and more fully formed. For those who think the album is dead, this offering shows you can provide something complete that also allows the Spotify brigade to go to any track and find something different.

There could be a tendency to build everything around the cello at the expense of any other instrument. There's not a bit of that here. It obviously takes centre stage on the slower numbers, being particularly wonderful on Chancy Gardener, that being a wonderful orchestral piece of McCartney Pop. But the album consists of perkiness at pace and here the instrument just slots in as part of the piece. It also rocks incredibly well.

Think About It is the nearest you get to what listeners of State Of Decay would expect. Hell Save My Soul is a slab of 70's Classic Rock, wonderfully celebratory, yet Make Your Mind Up is so atmospheric and moody. Getting Away With It is jauntiness personified.

Love Me edges towards the dance floor, but the real gem is the closer, You Say which is approaching 7 minutes of moody magnificence. It is a meandering atmospheric joy.  Shuffle / Play is so much better than even I expected. Please please don't take so long with the next one. Highly Recommended!

You can listen to and buy the album here,

Posted by Anything Should Happen at 18:28

Email ThisBlogThis!Share to TwitterShare to FacebookShare to Pinterest
Labels: The Mono LPs