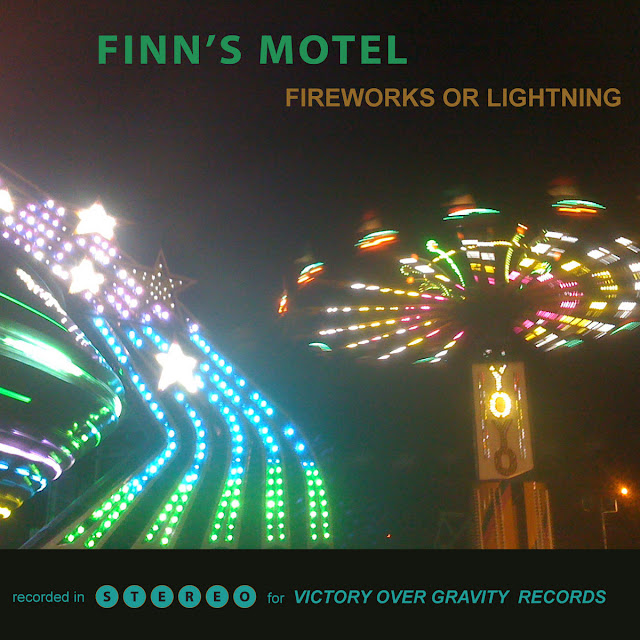 One of the main benefits of covering the new and under appreciated is that you often get a Wow Moment! It may be a new band that just grips you or someone you know who produces a completely unexpectedly great album. Finn's Motel fall into the former category. These moments don't come as often as you might think. So when they do, you just have to tell everyone.

Finn's Motel are a quartet from St Louis, Missouri led by Joe Thebeau and if on first listen you would describe this album as Modern Prog or Classic Rock you would be wrong as there is far more going on. Just as Rush fans berate anyone who call them Prog because of the early part of their career, well Fireworks Or Lightning has big choruses and riffs that hook you that has far more in common with Pop Rock.

Talking Of Rush, as I am wont to do, there is some similarity in some off the riffs and the odd solo, but Finn's Motel don't want to blind you with complexity, it is all about the song, If ever an album would explain what I Don't Hear A Single is about, it is far nearer this than September Gurls.

The catchiness of it all hits you fairly early. Repeated listens reveal far more. The variation is commendable. For instance, the outstanding More Heat Than Light has 1974 UK Glam Rock desperate to get out. Even something slower like Sparkler Bombs is never mawkish and just has to burst out part way through before reverting to the sedate.

The title track is something you could easily imagine being on a Barclay James Harvest, or indeed any other 70's Melodic Rock, album. One Gone rattles along, it really is a cracker of a song and to be honest my preference is probably when the band gather pace and let go. But I could say that about most that I listen to.

If you want Prog you've got it with the 10 minutes of Police Lights Suite. Constantly changing tempo and style, it is wonderful. My problem with Prog is that there is too much sub mediocre stuff around. Listen to this you bands, this is how it can be done tastefully without all the demonstrating your instrument adeptness. Open your ears and forget your prejudices and you'll be surprised at how much you enjoy this album. Highly Recommended.

You can listen to and buy Fireworks Or Lightning here. You can find out more about the band here.

Posted by Anything Should Happen at 20:11