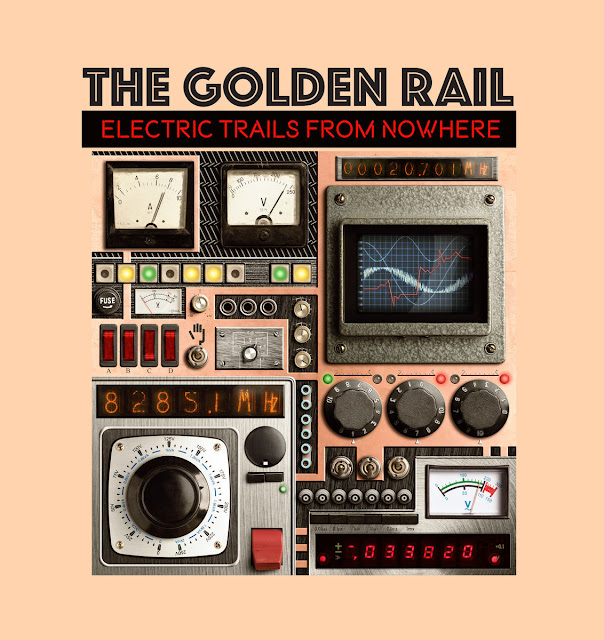 For those of you are paying attention, you will remember the review I did of The Jangle Band's Edge Of A Dream last year. If you didn't you can find the review here. I'd head there first, because you will be tested on it in the end of the year exam.

Where as the band's name gives away the direction of Edge Of A Dream, The Golden Rail largely hit another vibe. There is some jangle, but Electric Trails From Nowhere casts it's net far wider. For all the twang on Imperfectly and Metal And Shells, the album is rooted in a hinter land, somewhere between San Franciscan 70's Rock and vintage UK Pop Rock.

Many of you will be familiar with the stalwarts that are Jeff Baker and Ian Freeman, if not from bands mentioned in the previous review, then definitely from the DM3 and Summer Suns. Although the album isn't as chorus led as those two bands, there is a laid back gentleness that just grips you. Look Both Ways is a gem of a song, a lovely lovely affair.

The playing is wonderful, guitar hooks that just grab you, rock you but gently. There's plenty of nods to the likes of Jackson Browne, The Eagles, even Manassas, particularly on the likes of The Silent Birds.


The album is very much song with a story led. The Last Days Of Summer is in Doolin' Dalton territory. It's Time is very much in that mid 70's Jigsaw mode. This is a fine affair, sit back in the armchair joy. It's well worth your attention. You can listen to and buy the album here.


Posted by Anything Should Happen at 17:01

Email ThisBlogThis!Share to TwitterShare to FacebookShare to Pinterest
Labels: The Golden Rail