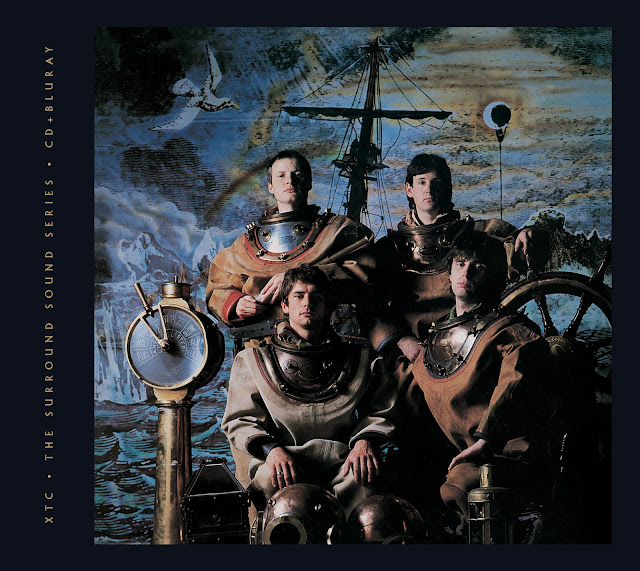 It's album number five in the XTC reissue series and Steven Wilson is again on board and has done a fine job as ever. Black Sea has had a surprisingly low key release considering it was the album that broke the band, particularly in the States. I've purposefully not read the sleeve notes yet, so that I can give my own uninfluenced take on it.

My favourite XTC album is always debated and usually ends up as Oranges And Lemons, but Black Sea is always up there. Drums And Wires had hinted at the Rock that was trying to get out after Dave Gregory had replaced Barry Andrews, here it just exploded into the musical sphere.

Pop sensibilities came to the fore. Only Travels In Nihilon hinted at what had gone before, Black Sea was all choruses with a big unabashed sound and the singles shone. Sgt. Rock is one of the great singles, although fans may acknowledge Senses Working Overtime more, it's rah rah is infectious.

Generals And Majors is up there with Oliver's Army as a great anti War song and Respectable Street is in the Ray Davies Kinks mould. In fact, Blur seemed to copy it's template to extremes. It's the big songs that grab you most and marvel at how much the band had progressed in such a short period of time.

Aided by a much more coherent live sound and the guitar mastery of Dave Gregory, both Towers Of London and No Language In Our Lungs are epics. The latter is not only my favourite XTC song, but one of my favourites ever.

Much has been made of the production over ensuing years. Steve Lillywhite and Hugh Padgham's big Drum sound is certainly prevalent and became a feature of the 80's and it's highly identifiable here and particularly in the new Steven Wilson mix.

However concentrating on ignores the songwriting progression of Andy Partridge and Colin Moulding, what Dave Gregory brought to the sound and how good a Bass Player, Moulding is. The instrumental mixes are inessential to a lot of fans, even for Karaoke, but they reveal Moulding's excellence.

Indeed, through the 80's I was often surprised at how many Bass Players cited Moulding's influence. On the Instrumental version of the album, you hear what a fantastic Rhythm Section, Terry Chambers and he were.

Fans have also remarked about the second disc on the reissues being Blu Ray and therefore needing a player to listen to it. It was explained to me a while ago that this was because Blu Ray was a format that got round copyright issues with Virgin.

There are many who like the 5.1 Mixes which take up a lot of disc space. I don't have a view on this as my hearing is shot these days, but I have many friends with better hearing who tell me the benefits are enormous. However anyone with a Blu Ray player for the computer can get the additional stuff to a manageable and more portable format.

Colin Moulding has also stated that he would prefer the releases not to contain as many outtakes and demos, but Andy Partridge states that the fans want to hear them and of course we do. The extra stuff on the Blu Ray Disc is great. There is the aforementioned 5.1 Mix, the original album mix and the album in Instrumental form, but we all want the things we haven't heard.

So there's the Phonogram Studios early recordings which are obviously sparser, but no less interesting. There are also six Andy Partridge Demos, three I've heard before, but I hadn't heard the three Swindon Town Hall Demos. Three Promo videos are also included.

The Audio CD contains the Steven Wilson Mix and although this doesn't bring out as many things that you hadn't noticed before as previous releases have, it does sound incredible. There's also additional B Sides, Ban The Bomb and the splendid Take This Town included with it.

XTC were at their most relevant to the outside world here, they would develop into a mixture of my little secret and a lack of understanding as to why everyone didn't appreciate them to me personally. Black Sea was the album that showed that the band were not just a frantic  Punk / New Wave Band.

It peeled back the layers to reveal a proper band who had their own sound but could write Pop that people wanted to listen to. The album remains a fantastic listen and if you don't own it you should and if you do, you will want this version more than ever.


You can buy this everywhere, but I support Burning Shed which handles all the Ape label stuff and much more. You can buy it from them here.


Posted by Anything Should Happen at 15:52

Email ThisBlogThis!Share to TwitterShare to FacebookShare to Pinterest
Labels: XTC