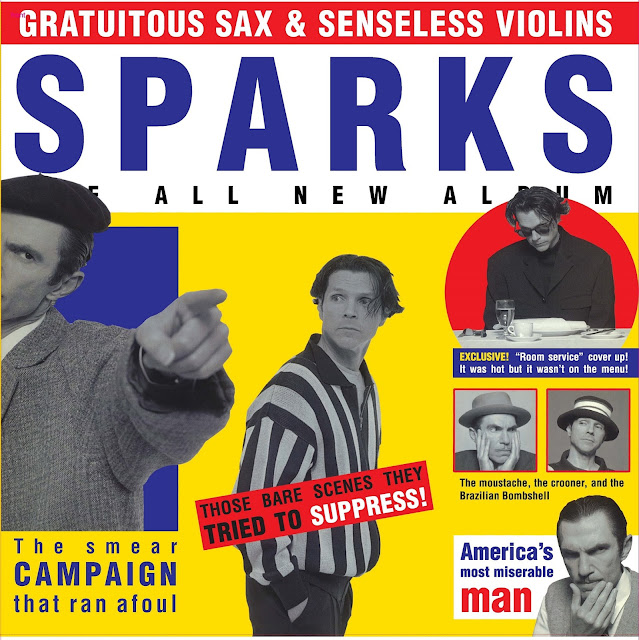 The first three albums that I bought under my own steam, as an eleven year old with a Birthday EMI Record Token, included Sparks' Propaganda. I knew every single word of every single song, even though I didn't understand what many of those words meant. I thought those lyrics were great then, looking back, I think they are a masterclass now.

I've been a real fanboy since. However, I am a music fan not suited to Internet Fan Forums and I have the scars to show it. I may adore a band. I will buy every album out of loyalty. But, I won't say an album is great when it isn't and the lead up to this 1994 gem hadn't been that pleasant to these Sparks infested ears.

The 80's hadn't been that great for Sparks. It started with the boring Terminal Jive and after two terrific band albums, it seemed to go down hill. In Outer Space seemed to be phoned in, Pulling Rabbits Out Of A Hat is dreadful and Interior Design was mediocre, if you could find it to buy it. This was all partially saved by the magnificent Danceathon that is Music That You Can Dance To, but by 1989, it looked like Sparks had seen their better days.

How wrong I was! The four year supposed hiatus wasn't that. They had spent most of their time working on a soundtrack for a Manga Film, Mai The Psychic Girl. Successive Big Name Directors were involved, but for one reason or another, opportunity after opportunity fell through and the soundtrack remains unreleased. I had no idea why I was watching The Richard And Judy show in 1993, but imagine my surprise when the musical guest were Sparks doing National Crime Awareness Week. Those boys were back.

I used to say that Sparks were at their best when they were at their weirdest. They took chances that were mind blowing and Gratuitous Sax And Senseless Violins was the third such example for me, following on from Indiscreet and Angst In My Pants. You cannot say that now, because from 2002 onward, every Sparks album is wonderfully inventive. But it's hard to describe how great it was to hear this album from first listen on.

It was also a little out of kilter with the times. Of course you had the likes of The Prodigy and The Orb, but the Guitar was back with a vengeance and Brit Pop strutted around like it invented music, but a killer single was ready to take on all comers, backed by a video that is a wonderful black and white homage. The tale of sibling rivalry that is When Do I Get To Sing My Way is magnificent. Hooks aplenty, the lyrical genius of Ron Mael and you can dance to it. It remains a fan favourite and rightly so.

The whole album is incredibly inventive, full of wit, charm and regular surprises. Big Choruses, inventive techno hooks and oh those song words! The fast talking verses to the big chorus on (When I Kiss You) I Hear Charlie Parker Playing.  The whimsical Now That I Own The BBC. The splendid Frankly Scarlett I Don't Give A Damn which could easily fit on Angst In My Pants. The angry I Thought I Told You To Wait In The Car. Sparks remained as different as ever, yet still more than slightly Anglophile.

There is a nod to that unreleased soundtrack on Tsui Hark, as well as a mod to those 80's albums with Let's Go Surfing, yet the stand out here is Hear No Evil, Speak No Evil, See No Evil. It's a sprawling hypnotic joy of a song, certainly in my Top 10 Sparks Songs. Even better news was to come. After a celebratory lauded return to the live stage at London's Shepherds Bush Empire. The all round reaction to that led to a UK Tour in 1995.

I'd saw the band on the 1975 Indiscreet Tour when it was all screaming girls and a minor Beatlemania. 1995 was very different. Grown Adults were crying with the emotion of it all, even Ron was in tears at the reaction at the end of the Manchester gig. Sparks were definitely back and in 2019, they seem even more relevant and loved, still picking up a new breed of younger fans.

Their current album, Hippopotamus is a magnificent offering. Songs that are a development of the past 20 years, but also songs like Missionary Position that could easily fit on Kimono My House. I can't think of a band as groundbreaking and modern who have been releasing albums for approaching 50 years.

So what of the three discs here? The first is a top notch remaster of the original album. Disc 2 is largely B Sides from the original CD Singles. Ideal if you missed these first time round and including a BBC Session, things like She's An Anchorman and mixes from the National Crime Awareness EP. It is the third disc that will light up the eyes of the fan.

Disc 3 contains unreleased songs. 17 of them including the unreleased EP from Live Drummer, Christi Haydon. These demos are more than interesting and a collector's delight. There's even a version of Mid-Atlantic with Ron's demo vocal.


Sparks remain in a field of their own. No other band are like them. No other band offer such a career wide variety of music. No other band have such a wide range of fans of all ages. Gratuitous Sax And Senseless Violins wasn't just a return to what they do best, it remains one of the finest albums of the last 25 years. If you don't have it, remedy that now. If you do, marvel at the additions on this third disc.

You can pre-order the album here. It is released on Friday 15 November. Full track details can also be found via the same link. For those new to Sparks, you will also note today's release of Past Tense, a new career covering Best Of that is available in 2 and 3 disc versions. Details are again in the link.

Email ThisBlogThis!Share to TwitterShare to FacebookShare to Pinterest
Labels: Sparks