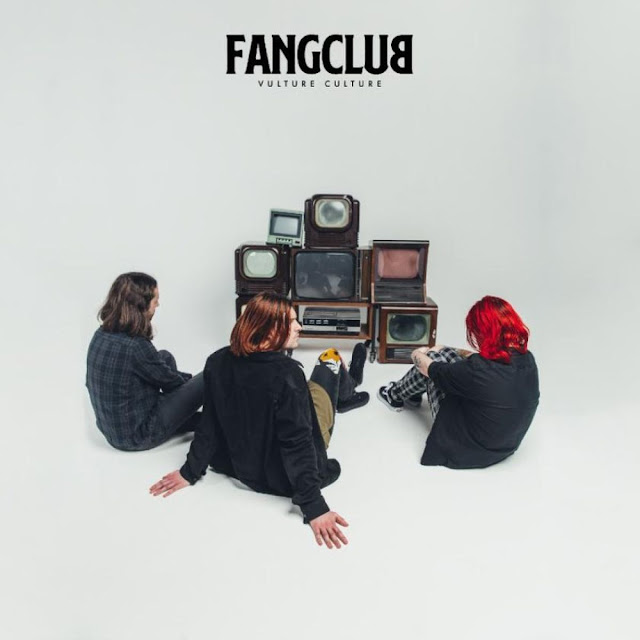 Dublin Trio Fangclub offer up their second album and as expected, it's a noisy affair. The debut album was reviewed by some as melodic grunge. which wasn't really the case. I guess those lazy reviews will call the follow up the dreaded sophomore word. Again that isn't the case.

Vulture Culture is a real advance, particularly in the instrumentation and arrangements. The lyrics are still dark, but the choruses are more prevalent. Nightmare is a real sing along joy, that chorus is almost Power Pop. It is an absolute gem of a song.

There will be some comparisons with Muse and there are glimpses as the three piece can get suitably heavy. However there isn't the self indulgence and po faced seriousness associated with Muse, nor the Science Fiction nonsense. There is also far more melody.

Steven King is a fine vocalist, bringing an easy listen to some really dark lyrics. As a trio, the band connect admirably and this results in 11 coherent songs. This feels like a proper album and should be listened to in it's entirety.


Having said that it's hard not to pull out individual songs. Hesitations is meandering heaviness, All I Have is almost Pop Punk and the title track is more foot tapping excellence. Vulture Club is a great album, fist pumping, yet at times, incredibly gentle.

You can buy the album everywhere, including the band's website here.

Email ThisBlogThis!Share to TwitterShare to FacebookShare to Pinterest
Labels: Fangclub