Albums That Have Been Gathering Dust : ELO - Time 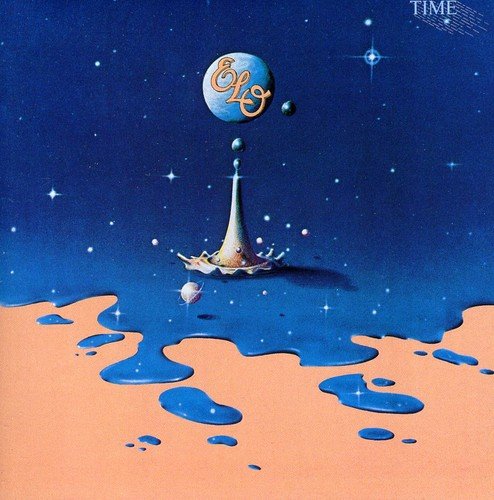 It's hard to believe now when you read Social Media. ELO were once not everyone's favourite band, the cool kids at the time just didn't like the Pop that emerged, it was for squares. You didn't see your peers carrying the album on the bus, Front Cover prominent, so that everyone could marvel at your taste.

As a Glam Rock teenager, the first music that I bought under my own steam were Glam singles. I had a particular love of Wizzard and I remember my Dad, groaning at Roy Wood's hair and make up and him informing me that Wood was never like that in The Move. As an 11 year old, I was taken into town for my birthday with a £5 EMI Record Token and having bought two albums, I wanted a Wizzard album, but didn't have enough for Wizzard Brew, when I saw a budget album on the Pickwick label and that I could afford.

That Pickwick compilation was a revelation, like most of their and MFP's albums there was two or three singles mixed with assorted album tracks. It was the non singles that grabbed me, Cherry Blossom Clinic (Revisited) and in particular, Jeff Lynne's What. I went to the library and looked up everything I could find on The Move and hence found ELO.


My first ELO album was Face The Music, from their I went backwards discovering Eldorado and the very different Harvest albums. The Harvest albums revealed the bridge between The Move and ELO, but it was the Pop that hit me most. That was even more so on New World Record and Out Of The Blue when Mr Blue Sky became everyone's favourite cheer up song. Mr Blue Sky may be the band's defining song, but I'd argue that their best is the magnificent Can't Get It Out Of My Head, however, I digress.

When Time came out, I was well into the UK New Wave and was just coming out of a 12 - 18 month spell of the NWOBHM, incidentally with a group of Heavy Metal fans that remain the best ever gang of people that I've knocked around with. I also wasn't that hot on ELO at the time, I never liked the Discovery album, or Disco-very as I remember noting it, it just seemed to be a bit welllllllllllll naff. The songs were really mediocre.

So for the first time in a few years, I didn't rush out to buy a new ELO album. I'd heard Hold On Tight and the Rock And Roll direction of that seemed better, but certainly wasn't going to have me jumping up and down at the prospect of putting Crepe soles on my feet. As I read reviews, I found out it was a concept album (really!!!) about the future (I have no time for Science Fiction, I watch it and think "That'll never happen") and was synth led.

I heard a couple of tracks on Phil Easton's Radio City Evening Show, a time when you could discover album tracks on Mainstream FM Radio and liked what I'd heard, so on the next day in Liverpool, I bought it at Penny Lane Records. I've never regretted that, quite the reverse. Time is noted as the last great ELO album and that's probably right. There are moments on albums that followed, but nothing worth listening to from start to finish.

Yes it's a concept album, although you wouldn't necessarily know that if it weren't for the Prologue and Epilogue. Also my favourite ELO album is also a concept album, but I couldn't include Eldorado in this series because I play it far too often. People say that the strings had gone, well they haven't, there are some, but they are minimal and not done by Louis Clark, but by Rainer Pietsch. Those string arrangements are largely replaced by synths.

There are a lot of synths present, so much so that many critics describe the album as Synth Pop. That's not quite the case, that genre is largely reserved for the Synth bands that were already around, usually two man affairs. It is though a Pop album, a great Pop album. The new direction may have led to the band being as ELO for the first time, but we all knew them as that anyway and with Jeff Lynne at the helm, the sound may have changed but the songs hadn't that much.


Although Hold On Tight is obviously remembered most, Twilight is mentioned just as much. The latter is a great song, sung and played at breakneck speed, but it's more simple songs that stand out for me most. Both The Rain Is Falling and The Lights Go Down, the former with it's atypical repetitive ELO chorus, the latter with an almost Reggae riff. The ballads are wonderfully big, Ticket To The Moon and 21st Century Man are moody, but sing along.

There are also more experimental songs, futuristic based of course, in From The End Of The World and Here Is The News, but all the trigger points are choruses across the tracks. ELO never had much left over from album sessions, except Secret Messages which was a rejected Double Album originally, so the three Bonus Tracks are B Sides. Of these, Julie Don't Live Here Any More, a simple but effective affair, that has always been a song that I loved as the B Side of the Twilight single.

Time has always been mentioned as the ELO album that is nearest The Beatles, I wouldn't go anywhere near that far, but is a splendid Pop album at a time when music was becoming more about dressing up than the quality of the song. The band's popularity would wane after this, but not so for Jeff Lynne as a Wilbury and Producer.

Incidentally, I have this album on a number of formats. Ironically for a futuristic album I have it on 8 Track. Yes 8 Track was still a thing in 1981. The album is available everywhere. In this case, I'd recommend CD as the format to listen to it on.

Email ThisBlogThis!Share to TwitterShare to FacebookShare to Pinterest
Labels: Albums That Have Been Gathering Dust, Electric Light Orchestra, ELO