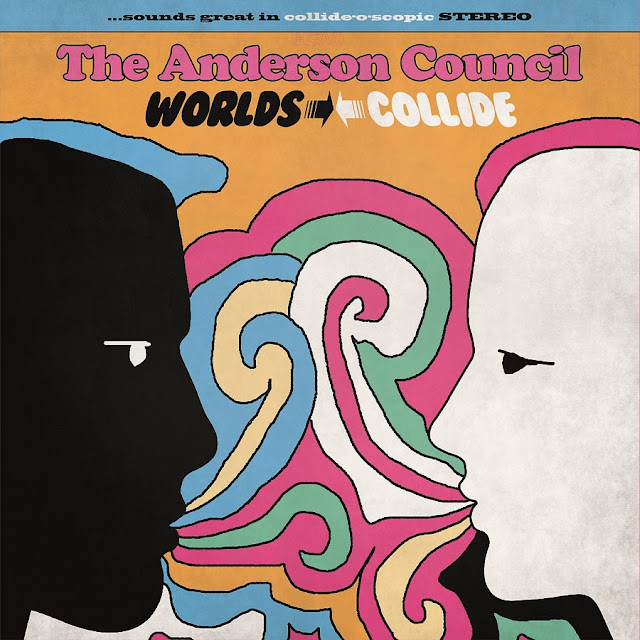 The Anderson Council follow up 2016's splendid Assorted Colours with Worlds Collide. You can read the IDHAS Review of Assorted Colours here. In a career that has hit the two decade mark, every album has moved one step further and this album is exceptional.

For those not in the loop. the quartet specialise in late 60's Psych Pop, with the emphasis on Pop. It's this Guitar Pop that marks them out at the best in the field. I love the genre, but I don't see anyone better covering Psych around.

Let's get this clear first of all, Worlds Collide is absolutely stunning. It's a must purchase and it's a certain Top 5 End Of Year and something special is going to have to go some to beat in. All of what fans would expect is here, but there's so much more.


There are two different versions of Mrs Kirkby's Refrigerator. The first is a wonderful slice of Flower Pop, the second features Peter Noone and is a ringer for Early Bowie and then you get a superb guitar solo. These surprises are everywhere though.

Your Devices is great Pop Rock, a cross between UK New Wave and Carl Wayne era Move. How Much How Long verges on Chinn-Chapman Glam Rock and there's a Space Oddity Bowie feel to Lads And Lasses.

Gentleman is very Small Faces and Grey Heavenly Lane is breezes by, including a stunning Guitar Solo. Lyrically excellent, there is no major departure here, it's just that the songwriting that gets better and better. Peter Horvath may very well be The Earl Of Psych Pop, I certainly would argue the case.

You can buy and listen to Worlds Collide here.

Email ThisBlogThis!Share to TwitterShare to FacebookShare to Pinterest
Labels: The Anderson Council