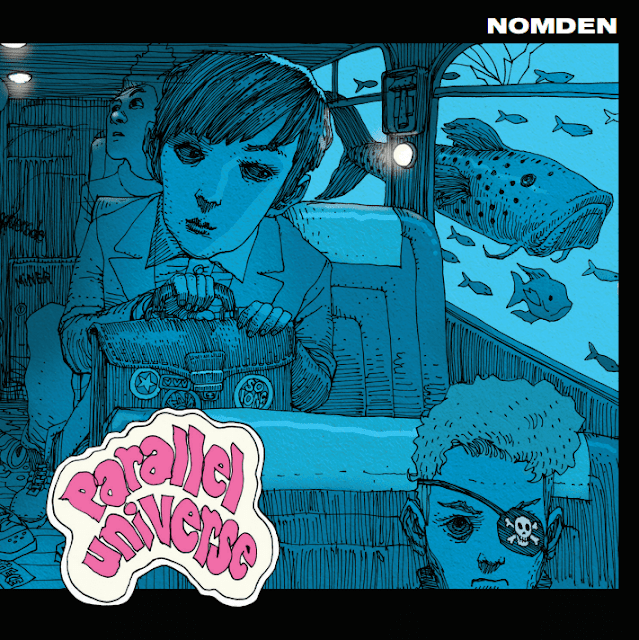 Daryll-Ann are back in the news with Michael Simmons's wonderful Happy Traum EP and we have always loved the band and the solo adventures that followed. Diederik Nomden joined Daryll-Ann on Keyboards and Backing Vocals for the last two albums, Trailer Tales and Don't Stop, but is the now that we involve ourselves with.

Nomden formed The Analogues in 2014 who are one of the very best Beatles Tribute bands around. However the band have recently released an album of their own material as The Analogues Sideshow and that is a wonderful listen and will be reviewed here before the end of the month.

In December 2021, Nomden released his second solo album, Parallel Universe. I meant to review it in the New Year and it completely slipped my mind. So with the release of the album on Vinyl this month, it has given me chance to remedy that.

There are often references in my own reviews to the great Pop Rock albums of the 70s. Many have been seriously reassessed over recent years to reflect the quality of that genre. The albums were put on the uncool pile with the advent of Punk, despite sales still being buoyant.

I was growing up in that era and the albums were certainly singles led, but the difference was that albums were no longer singles and any old thrown together rubbish. These albums were made as complete entities and then singles chosen off them. I'm thinking of the likes of Pilot, Jigsaw, Liverpool Express and John Miles.

That is where Parallel Universe comes in because it sounds like and is every bit as great as those from the second half of the 70s. Indeed it is like a cross between the latter two mentioned. These are great melodic songs, built around fine arrangements and big choruses.

Piece Of The Pie could be Squeeze doing Philly, Wastelands could be Crowded House and yet Masquerade is a modern day example of 1968 Pop, very McCartney. No Better Place To Be edges on Pastoral Pop, beautifully arranged piano fayre.

Happy When Its Raining reminds me of current Pop Rock protagonists such as Iain Hornal or Phil Thornalley with every instrument playing its part and a belting Guitar solo. So Long is splendidly melancholic piano pop, moody and magnificent.

The stand out song is the title track, a great opener, very John Miles, instrumentally top notch and comparable to Eric Stewart's vocal led finer 10CC songs. This will be another favourite amongst followers and justifiably so. Highly Recommended!

You can buy and listen to the album here.

Email ThisBlogThis!Share to TwitterShare to FacebookShare to Pinterest
Labels: Nomden