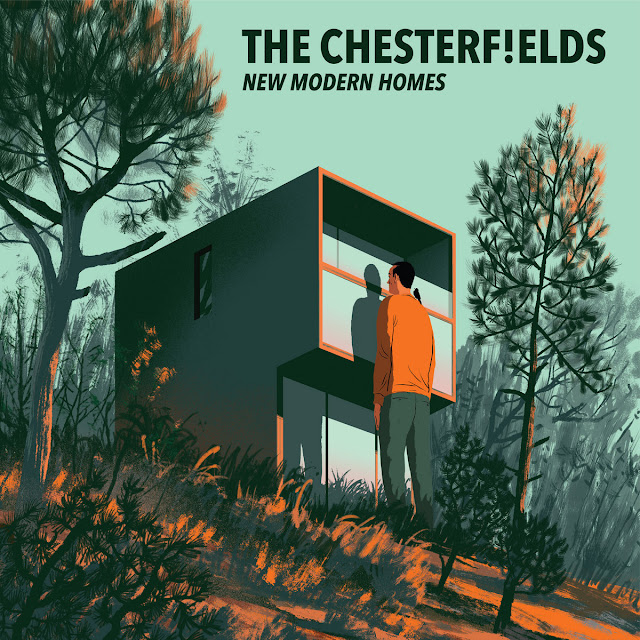 I've mentioned before that I got so disenchanted with the UK Music Scene in the first half of the 80s that I turned to the US Indie brigade and the result was a big part of my pre IDHAS Blogging days. It was the UK Indie 80s that reignited my interest in the second half of the decade.

I was never that C86, even though I applaud what it did for the scene and the effect it still has now. These were Indie Guitar Pop bands and labels who revelled in the joy of the song. The Chesterfields' 1987 debut album, Kettle, was and remains an absolute gem to listen to.

The band are more than welcome back and although the sound has changed slightly from the urgency to something nearer some of the bands they mention on Our Songbird Has Gone. That song is a magnificent tribute to Davey Goldsworthy's memory. His death in a hit and run accident in 2003 looms large over the album.

The current line up have added new dimensions, particularly the addition of Helen Stickland whose vocals have helped soothe the sound and her lead on Year On The Turn is Dream Pop par excellence. At times there is a splendid gentle Psych Pop feel to the album, especially on the likes of Mr Wilson Goes To Norway and Oh My Ampersand.

The vibe is ace. A great big dollop of Jangle matched with wonderful vocal harmonies. Tuesday Night has a hint of The Housemartins. Postpone The Revolution is a corking affair, built on a killer riff. Yet Hey Margaret Calvert is magnificently moody, almost Folk.

My Bed Is An Island is a reminder of those early days, far more direct with an hypnotic chorus. Bitesize is a chirpy opener and a signpost of the joy that is to follow with a driving Bass line and a top notch Guitar Lead. Bands that return after so many years do not usually produce albums as great as New Modern Homes. Let's hope this is the first of many.

You can listen to and buy the album here and everywhere.

Posted by Anything Should Happen at 22:31

Email ThisBlogThis!Share to TwitterShare to FacebookShare to Pinterest
Labels: The Chesterfields