Vegas With Randolph - Rings Around The Sun 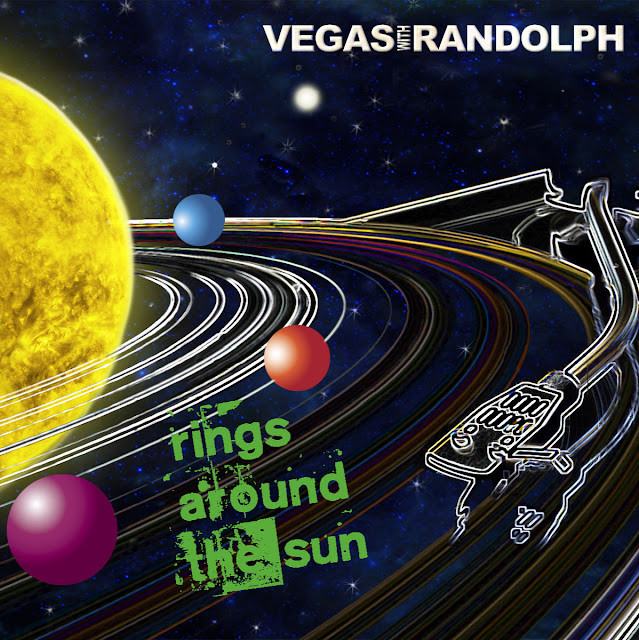 Since an operation solved my hearing problems, a couple of months ago, I've been like a kid in a sweet shop music wise. I've also realised that over the past two or three years I have been largely in a permanently bad mood due to listening to music with one half good ear. It's been more like 1968 Radio Luxembourg than glorious stereo sound.

I'm also pissed off because I've missed out on Vegas With Randolph.


All the sign posts were there for me. On this, the band's third album. the involvement of Andy Reed of The Legal Matters, Brandon Schott and the excellent Wim Oudijk. I missed them all.

I even find that one of my best friends, Mick Dillingham, has been a long time admirer.

Power Pop can be such a labelling genre, holding back bands that are far more than that and Vegas With Randolph are much more than chiming riffs. There's a cleverness in what they do, melody, lyric and subject wise, a greater depth.

I'm sure there will be Fountains Of Wayne comparisons and in some cases you can hear that. More importantly, I've been looking for another Silver Sun for well over a decade and I can see similarities there. But the band are far more than Power Pop. In fact, the only real straight ahead Power Pop is Late June. Let's settle on Power Pop with Brains. In fact, the songwriting reminds me of the likes of Lannie Flowers.


The album is a natural follow on from the previous album, Above The Sun, equally excellent. The 7 part Double Play on that album is absolutely splendid.

Rings Around The Sun relies a bit less on Orchestration and multi harmony in favour of even more hooks. There seems less keyboard.

There's far more variation, the rock out of Salt Water Taffy and the FOW like Cool Things, although I'm not sure of the Only Fools Like Horses like rap. The Glam like Everybody Wants An Atom Bomb and could be the best song on the album, but one beats it.

Snow Day, despite the title, is a real fun summer singalong and My Lost Colony is all jangle, almost Tom Petty in the verse.

The absolute gem though is the title track, a superb anthem, something that would have stood high and mighty in the Brit Pop era with it's Beatlesque overtones. It then morphs into a Queen like harmony and Brian May type solo. A great song.


The album could suitably end there, it's a song that would end the old Side 2's. But there's a further treat to wind it all up.

The closer Drops Of Gold is a real country shuffle with a real twang and some great orchestration. This just proves the band's versatility. I'm really really impressed with the album, A real depth to the Power Pop canon, rarely seen. You wouldn't normally bother too much about the lyrics in this format, you do here.

The band are currently recording Album Number 4 and I can't wait. You can purchase all three albums for download at the band's Bandcamp Site here. There's also some newer recordings to buy there. However, I'm a firm believer that some bands should be played on CD and Vinyl and Vegas With Randolph are one of that category.

You can buy all three albums on CD for the ridiculously cheap price of 22 dollars. I listened to this album a few times yesterday on CD and it sounds even more wonderful.

As I mentioned on Facebook earlier, I'm rarely surprised by anything these days and I've been surprised by two albums in the last 24 days. This album will enrich your life and I'll leave you with one of the newer songs. another glam stomper, Three Red Hooks.

Posted by Anything Should Happen at 16:00

Email ThisBlogThis!Share to TwitterShare to FacebookShare to Pinterest
Labels: Vegas With Randolph