Mott The Hoople - The Ballad Of Mott 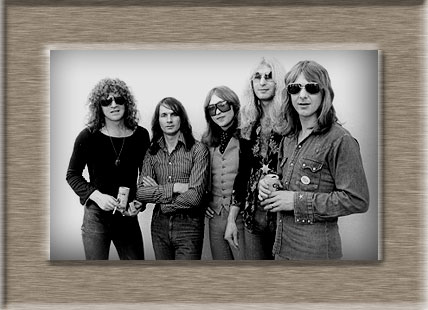 It's hard to make anyone understand the fawning and adulation that Mott The Hoople get from their fans. It's a devotion every bit as deep as that of a catholic, a Seventies miner to the union or a Morrissey fan.

It's hard to explain the devotion and utter Hoople trainspotter mentality to the casual listener who looks upon them as a one trick All The Young Dudes pony or may remember All The Way From Memphis, the fan's love is deep and never leaves them.

Before the 2009 reunion gigs, the band hadn't played a chord together since 1974, nigh on four decades since a studio album and their fan base was only ever enough to sell out a mid size UK Tour of the Apollo's and Empire's of the world. Yet at those reunion gigs, I witnessed grown men crying, myself included.

Their albums largely hit the middling reaches of the chart and their best stuff on the Island label, rarely did that.

Together just over five years, that produced just seven studio albums and yet the reunion was named as the gigs of the year and they commanded the column inches of all the popular press.


Two things strike me as the reason for their deity like appeal.

Firstly, on their day, live they were untouchable, they made shows look like they were playing just for you, they milked every corner of the venue.

Secondly, even if they didn't care about the fans, they gave you the impression that they did, songs were about the fans or about the band, everything seemed so heart felt. As a fan you felt wanted, as though you were an extension of the group and that they understood exactly how you felt.

Of those albums, Mad Shadows is the absolute masterpiece, even though Brain Capers seems to have been extolled to heights that it doesn't really deserve over the years and Mott appears in every music magazine's Top 200 albums ever.

The rest were certainly patchy. If you want to hear them at their best, the medley from the live album is what you need.


There were two Mott The Hooples, like two different bands. The Island Years were a ramshackle delight, probably purposely c/o Guy Stevens. The CBS Years were glamtastic, rescued by David Bowie with All The Young Dudes and the resulting album, it was dressing up and fun and all about the kids.

However, in all this glam joy, there was still plenty of serious music, take the wonderful "Alice" on "The Hoople" swansong.


In truth, the end was when Mick Ralphs left, Ariel Bender (Luther Grosvenor) kept them going for another 12 months with sheer enthusiasm and Morgan Fisher added a musical excellence that was more professional, but Hunter's writing had less heart.

Mick Ronson joining seemed a marriage made in heaven and the money beckoned, a paydirt tour of the USA and a sell out UK Tour were largely organised, but different managers made the union impossible and that was it.

Their final single, Saturday Gigs said everything about the band, who else would sing about their history with Goodbye's at the end and make it so catchy?

In those days, rock stars were revered in a way they aren't now and won't be again.

Their influence on other bands, most notably The Clash is there for all to see and the plaudits that are passed down from the likes of Mick Jones, Michael Stipe and Morrissey are in tune with the fans, for they were and remain massive followers of the band.

Morrissey has the same fan adulation as Mott, but you sense the two way acknowledgement isn't there.

The band carried on as Mott and British Lions with decent albums that are appreciated, but they weren't Mott The Hoople.

Ian Hunter started a solo career that produced some gems, particularly the first album with Ronson that contained some material that was for Mott The Hoople and his last three albums which  have been up there with anything he's ever done and a new one is out next month.

The last YouTube clip is Lounge Lizard, a song that was to appear on the next Mott The Hoople album, but instead, became part of that Ian Hunter solo debut.


The Ballad Of Mott however rolls on, there'll never be new material, but you can admire the legacy.

As Hunter sang on that final single, Don't Wanna Be Hip, But Thanks For The Great Trip.

Comments are encouraged and also your own thoughts of bands who experience similar devotion.

Posted by Anything Should Happen at 12:25

Email ThisBlogThis!Share to TwitterShare to FacebookShare to Pinterest
Labels: Mott The Hoople