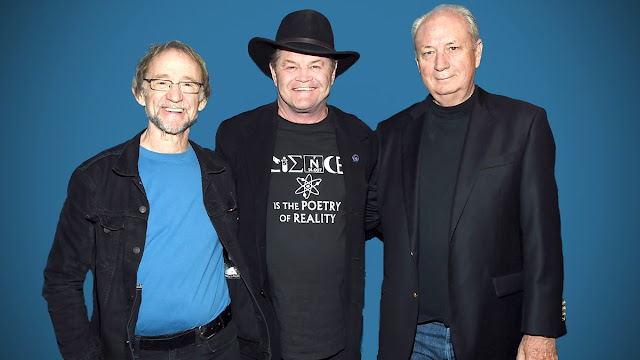 Quite a few of you non UK people have been saying that you can't get at the recent excellent 2 PART  BBC Radio 2 documentary due to the region restrictions on I-player,

I have uploaded both parts to the I Don't Hear A Single Facebook Group on a 7 day We Transfer link. This will allow you download it quickly and free. If you want to join the group, details are at  the Top Right of the Blog.

This is hot off the press, I only ripped it to 320 last night, so I haven't edited the front end of both episodes, so you'll get the news ahead of each 57 minute episode. If I attach the link in this post, it'll get taken down and the Blog likely reported.

The BBC Blurb is below:


Back in 1966 the TV & pop worlds were shaken by the arrival of The Monkees, a post-Beatles, pre-boy band sensation who took the charts by storm, selling millions of records off the back of their hugely successful TV series.

Except that they weren't. They were actors playing a part, pretending to be a band, miming on screen and singing over other people's music. But like Pinocchio, they wanted to be real and the puppets turned, wrestling control of their records from the hands of the TV moguls and striking out on their own, This path that led them to the Sgt Pepper recording sessions, Jimi Hendrix avant-garde film-making and a completely unique type of stardom.

Now, 50 years later, The Monkees are back with a big hit album full of songs written for them by the likes of Paul Weller, Noel Gallagher and Andy Partridge of XTC, alongside Neil Diamond and Harry Nilsson.

In this two part series, The Monkees tell their own story with new, exclusive interviews with the 3 surviving band members, alongside their friends, family and associates.

Posted by Anything Should Happen at 20:38

Email ThisBlogThis!Share to TwitterShare to FacebookShare to Pinterest
Labels: The Monkees