Bryan Estepa And The Tempe Two - Every Little Thing 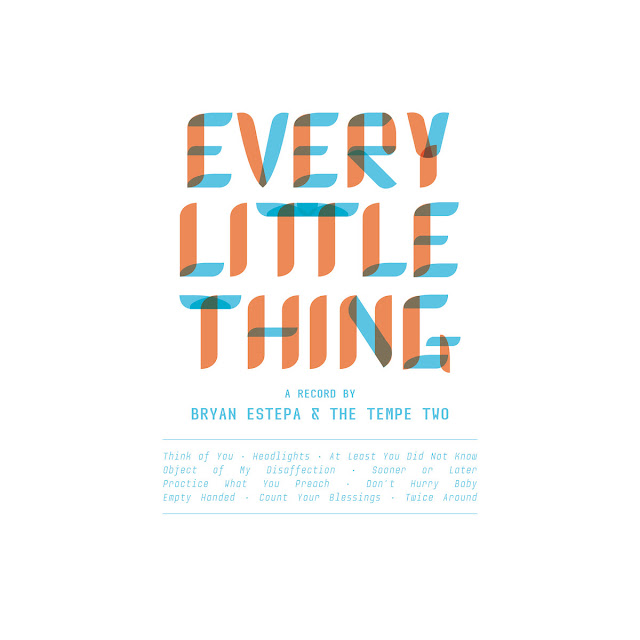 Over the past couple of weeks, a couple of people had recommended Bryan Estepa's new album, Every Little Thing, My ears pricked up when Daniel Wylie, someone who is usually spot on, was singing it's praises.

I'm pleased to say all were right, it's a great listen. For his fifth album, Sydney's Estepa provides a much more varied album than you think that gentle melodic voice could. It's the quality of his songwriting that provides that variation.

Just as artists get pigeonholed, so do countries. Australia is supposed to be all Power Pop and Big Rock, whilst New Zealand provides the calm and melody. Well this Australian has made a New Zealand album if that rings true.

The Stand Out Song is Empty Handed which after is really up tempo and the chorus unexpectedly Power Pop. It's a great great song.


Bryan Estepa gets compared to Neil Finn and we are told he's Alt Country, He's neither, but both and never what you expect. I can hear Elliott Smith, but my main thoughts are David Gates' 1973 debut solo album.

Object Of My Disaffection is the nearest you'll get to Neil Finn, whilst Headlights shows his voice off best, a real slow pleasant groove. At Least You Know reminds me of Simon And Garfunkel.

The Country feel is there on the splendid opener, Think Of You, but even that bursts into a soaring close.

I played this last night and then again this a morning. It's definitely a get into the day album and the world will seem that much calmer after it. I'm a bit ashamed that I haven't listened to any of his stuff before this, because this is an album that others could try and would fail, because it would be too mellow.

Bryan's songs ensure that it isn't and that's his asset. His voice can sing those variations and so never feels samey. An uplifting album and there aren't too many of those around.

You can listen to and then buy the album for Download or on CD here.

I know I bang on about buying physical product, but this is definitely an album for the journey into the work. The added bonus is that when you pull up in the Car Park with it on, you'll impress all your friends with your musical taste.

Posted by Anything Should Happen at 07:08