Ian Hunter - From The Knees Of My Heart (4CD) 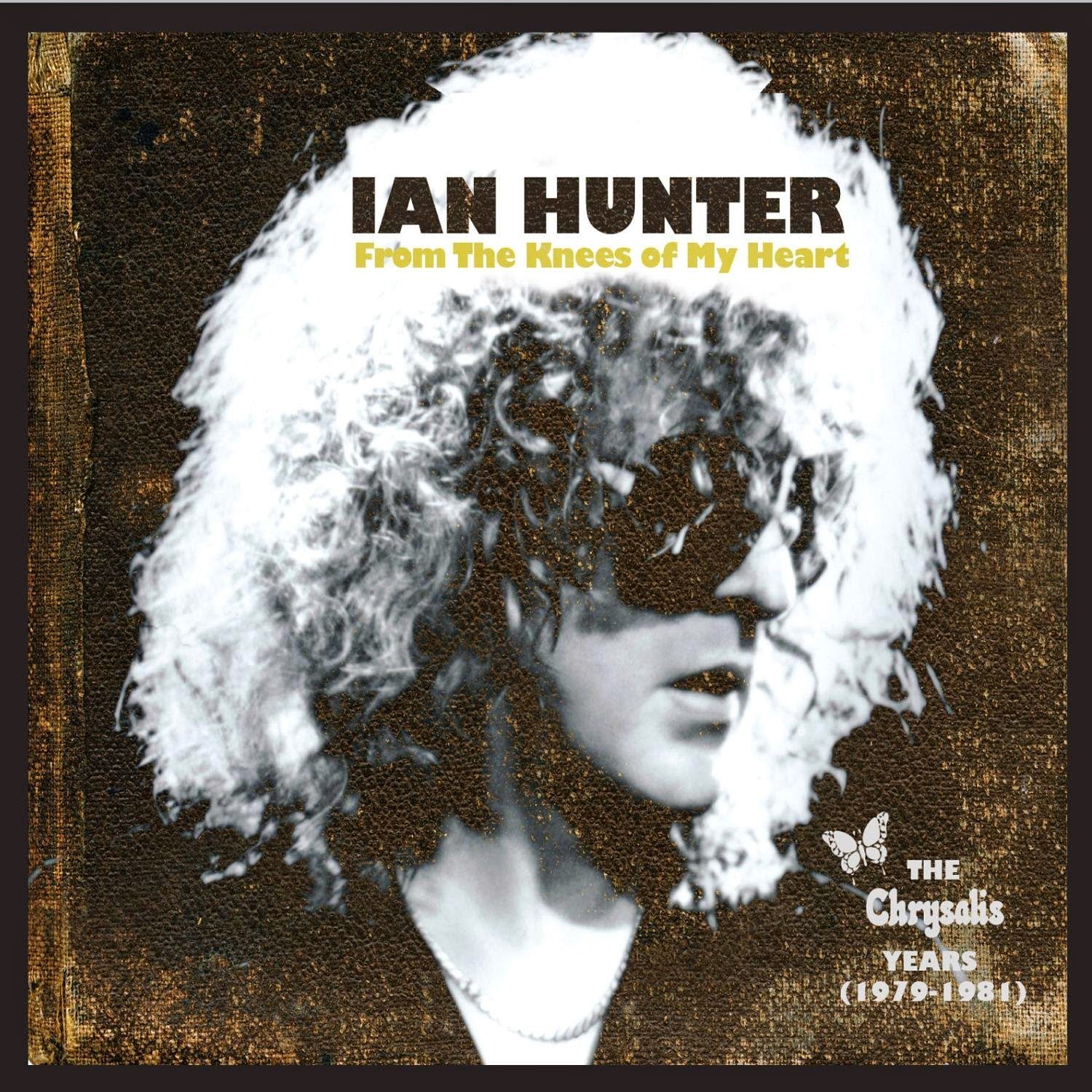 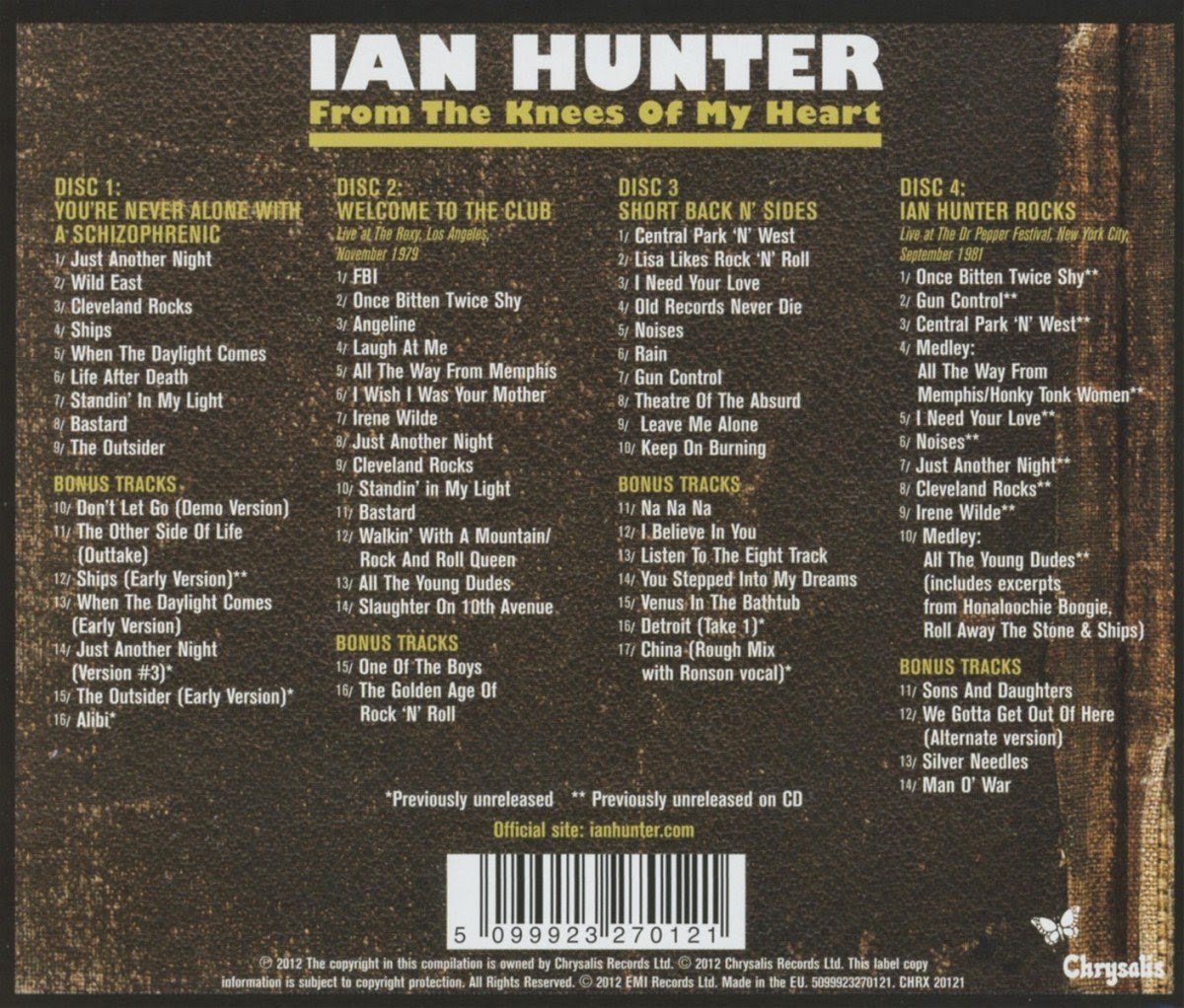 A couple of archive ASH posts for today whilst I catch up with reviews and more importantly listening.

This set was reviewed in 2012 and is still available. An ideal purchase for those who don't want to pay £250 for the upcoming 30 disc set and an ideal intro to his new album, Fingers Crossed, which is due on 16 September. I've added some youtube clips.

This 4 CD Chrysalis Years set from the mighty Ian Hunter for £13 is cracking value, why wouldn't you order it now?

This collecting obsession started largely with two bands for me, Sparks and Mott The Hoople. After two polar opposite solo albums, both fantastic, Hunter's career looked over after the abysmal Overnight Angels album. That album led to a cancelled UK Tour due to poor sales and no American release. CBS ditched him and he seemed to be content as a sort of godfather of punk, producing the new breed. My own tastes were moving away, consumed in New Wave excitement from the likes of XTC.

Fortunately, the career wasn't done for, the great man was to return with his best album ever. Signed to Cleveland International with the E Street Band for company and with a new label deal with Chrysalis, the second wind was a hurricane.

A brief summary of what's on here before more of an appreciation of THAT album. You get the two studio albums, You're Never Alone With A Schizophrenic and Short Back N Sides, the live album in the middle, Welcome To The Club and the previously unreleased (in audio format), Ian Hunter Rocks.

Ian Hunter Rocks was from the Dr Pepper Festival In Central Park in 1981 and had only been released on video. It was during the Short Back N Sides Tour with Robbie Alter on Lead Guitar. I saw Hunter on that short Festival Tour at Milton Keynes Bowl supporting Thin Lizzy, not his best album, not his best tour.


Welcome To The Club is a fantastic live album. It allowed Chrysalis to have some Hoople songs and there was a fair bit of unnecessary touching up in the studio, unnecessary because the live shows seemed more earthier and Mick Ronson's meandering riffing was toned down. A better reflection of how they were live is the second disc on the Schizophrenic Anniversary release double disc.

However it remains one of the best live albums around, Angeline is the ultimate live version. The original double LP was three sides live and one studio, all are present.

Short Back N Sides has it's moments, but it has too much messing about courtesy of Mick Jones, noises everywhere, but there are some gems, Central Park N West, Old Records Never Die and the magnificent auto biographical, Rain. There's seven bonus tracks, far less than the original double CD release but the 4 disc limitations meant that stuff had to be cut. The bonus live stuff from the Welcome To The Club CD Release is also missing.

Now to Schizophrenic! What an album. I remember fans, myself included, had got a bit sick of the album by the time the Noughties arrived as it had been such a large part of Hunter's live set for over two decades. A return to it, shows how wrong we were. It's one of the great great albums.

Back in tow with Ronson, backed by part of the E Street Band with appearances from the likes of Eric Bloom and John Cale, it never lets up. I've never liked When The Daylight Comes, surprised at it's 7 Inch release instead of Wild East, the other 8 songs are majestic. In typical Hunter fashion a mix of the Rocker and the Ballad.

Just Another Night is Stones meets Dylan (as Hunter as always been) with Ronson riffing all over it, Wild East is magnificent and sax led, Cleveland Rocks is the anthem, a reworked England Rocks from the Overnight Angels era.

Ships is about the Father to Son relationship, covered by Barry Manilow to aid the coffers. Life After Death is one of those fast Hunter blasts, Standin' In My Light a Hammond Organ led diatribe against a former manager. Bastard, a meandering record with John Cale on ARP organ all over it and the conclusion is sublime.

The Outsider is a Hunter piano Ballad but Mick Ronson summons up his Roy Buchanan act and just Nashvilles it, the solo at the end is jaw dropping.

7 Bonus Tracks with Schizo, including two versions of Just Another Night, piano ballad to Jam, the first sounding nothing like the original. Early Versions of Ships and When The Daylight Comes and the demo of Don't Let Go, eventually given to Ellen Foley for her debut album, produced by Hunter And Ronson. Alibi is inessential.

Hunter would not hit these heights for another two decades and is of course once again a national treasure, but these three years showed a return to relevance and in Schizo, an album that sounds as good 35 years on.

Posted by Anything Should Happen at 13:44