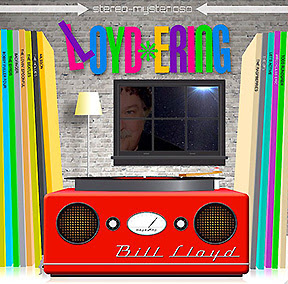 I've been a fan of Bill Lloyd for more years than probably either of us care to remember. Set To Pop remains one of the great Power Pop Records and is till as fresh and relevant as 22 years ago.

I'm a bit late telling you about his latest offering, as I am with a lot, but with the hearing sorted, it's time to inform you of it's greatness.

Like a lot of the Power Pop Community, some great songs are at times thrown away on compilation albums and Power Popsters do like a tribute album. My good friend, Angelo, at Power Pop Criminals has done a pretty good job over the years of collating these Power Pop gems from all and sundry into splendid collections.

On Lloydering, 12 of these songs get compiled lovingly into an album that stands up in it's own right.

All are played beautifully in the Lloyd Style.

Special Mentions have to be given to a few of his choices. Todd Rundgren's I Don't Want To Tie You Down is a real surprise and too few people realise the pop genius of  Mitch Easter, so Let's Active's Every Word Means No is more than welcome.

If Bill had only recorded Set To Pop and Standing On The Shoulders Of Giants and played his part as he did in the supergroup, Swag that would be enough for me to install him in The Power Pop Hall Of Fame.

But there's been loads more great stuff and this latest album just adds to his reputation.

You can find out more about Bill here. There's also links to buy the album on CD or Digital on the site.


Posted by Anything Should Happen at 11:57