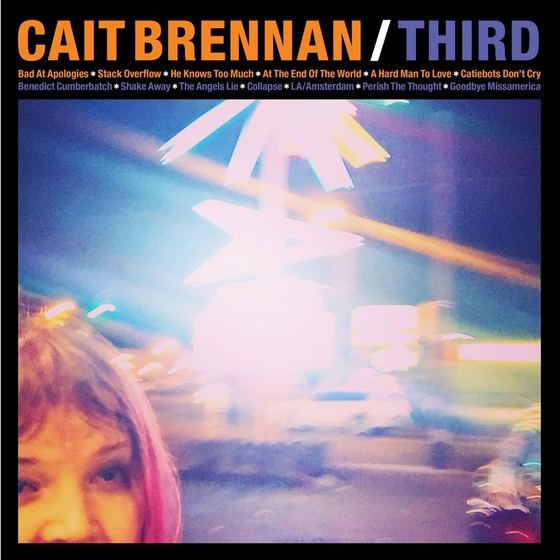 The Omnivore label continues it's quest to release the vital new and the under appreciated old and in the former category, no one deserves greater recognition than Cait Brennan. Hot on the heels of last year's full length debut, Debutante comes Third and it doesn't end there because the follow up to this is already in progress.

There is of course the back story to this and her battle with Parkinsons Disease and you can understand the rush of new material, but it's the creativity and quality of this volume is amazing. Third is an amazing album, not only showing the depth of her talent, but also revealing the lyrical brilliance in her songwriting.

I've been a long time fan of Fernando Perdomo since his Dreaming In Stereo days and his reputation grows and grows away from his sterling solo stuff. He's fast becoming a collaborator of choice and the team up with Cait Brennan seems to be a match made in heaven. Although the album will get pointed at as Power Pop, particularly with the recording being at Ardent Studios, this is much more than that.

This is an album steeped in Classic Rock and the power of Brennan's voice shines through. There is lots to admire in Third's slower moments such as the Power Ballad, Goodbye Missamerica and the Bacharach like arrangement of At The End Of The World, it's when she rocks that it works best.


Whilst people will be automatically be drawn to the poppy Benedict Cumberbatch, it's songs like the stunning opener, Bad At Apologies, that grip you most. The lyrics shine through on that as they do on He Knows Too Much, adding "I Think We'll Have To Kill Him" to the line. Similarly the "What Are You Starin' At? Baby,What's Your Problem, Don't Make Me Come Down And Solve Them" on A Hard Man To Live, a song delivered at breakneck speed.

The combination of Brennan and Perdomo is wonderful, one writes and delivers superb songs, the other knows how to put the meat on the bones and there is some great guitar on the album as well as formidable arrangements. Finally it's wonderful to hear Van Duren playing guitar on Shake Away, one of the most underrated Power Poppers around. Third is probably the best album that you'll hear all year, it's awesome.

People In The States listen to the whole album via You Tube here. 30 second samples of all the songs are on Amazon here. You can buy the album everywhere and you should. In these days of manufactured one song mediocrity, albums like this should be cherished.


Posted by Anything Should Happen at 20:21