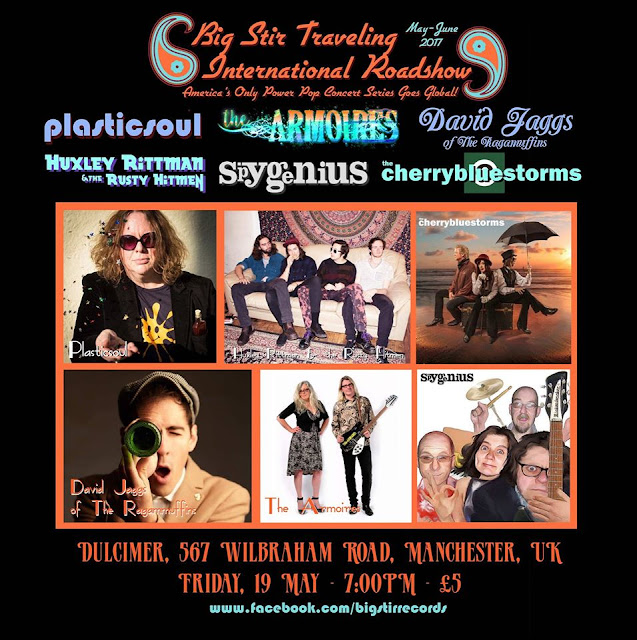 I rarely do previews of upcoming shows. It's not really what I usually get involved in, but I have to tell you about this. There's a number of reasons why I should, but I'll limit it to two. I've long moaned and groaned about how hard it is to see great Power Pop or Pop Rock in the UK. In the past, we've had great bands coming across from the States, Europe and as far afield as Australia, with the odd exception such as The Posies, that's much less so now.

So when you get an opportunity to see four on the same bill with the added bonus of two of the best UK offerings on your doorstep, we have to get out and support it. Six bands for a fiver, it's like I really do live in 1975.

Secondly, if ever a line up explained what I Don't Hear A Single is about, it would be this one and it's a rare chance for people to see these acts in the flesh. From my own side too, I never fail to be surprised at how IDHAS took off and how it has become known worldwide. I don't get out and about as much these days and so it's even a chance to talk to me about the new stuff that you think I should be covering.

I won't make this too long, so I'll try to briefly give you some idea of what you could witness. I can attest that one of the bands that get the most interest amongst us are The Cherry Bluestorms and they are especially delighted to play in Manchester. The review of their See No Evil single remains one of the most popular posts on here, unknown for a single. The UK influence is written all over their music, it's like a 60's Beat Pop version of The Byrds and of course you have The Dickies connection.

It's been eight years since Plasticsoul's magnificent Peacock Swagger. Well they are back with the newly released Therapy album. Steven Wilson hasn't lost anything in the gap. The album is a real rock out. It's melodic rock at it's finest and you'll see the review of it here tomorrow.


One of my favourite bands are The Armoires. Rex Broome and Christina Bulbenko's brand of sunny California Pop with a twang is an absolute joy to listen to. Bulbenko has the voice of an angel and I defy anyone not to be tapping their feet within seconds. Rex is also the brains behind Big Stir, a monthly Power Pop live showcase that is Big Stir. A Californian treat that receives rave reviews rightly.

It's wonderful to see Spygenius back in the live arena. The Canterbury four piece remind me so much of those Not Lame days. Imagine Robyn Hitchcock in a 60's Psych Pop band. Peter Watts describes himself as a magpie, but it's the way it's all put together. Wonderfully inventive and the nearest the UK has to the type of bands that we adore from the States.


Without hesitation, I'd say the band that grabbed me most at IPO was Huxley Rittman And The Rusty Hitmen. Very much the future of Power Pop, in line with Denmark's The Caper Clowns. I'd heard a couple of their EP's and liked them, but was not prepared for what an incendiary live band they are. Their set was over far too quickly and it was outstanding. They are currently recording their debut album, but these will be definitely a band that you will tell everyone in ten years time that you saw in a small venue.


Last, but very much not least, we have David Jaggs, leader of the North West's pride and joy, The Ragamuffins. I come across a lot of local bands, no one does what they do. There's a real lyrical depth in songs with organ and brass. I like to think of them as a modern day Dexy's, but there is far far more of them than this.


So this is not going to be a thing that I do to often, but I cannot miss the opportunity to go out and support these artists. What a night it is going to be.


Posted by Anything Should Happen at 21:38

Email ThisBlogThis!Share to TwitterShare to FacebookShare to Pinterest
Labels: Big Stir, Huxley Rittman And The Rusty Hitmen, Plasticsoul, Spygenius, The Armoires, The Cherry Bluestorms, The Ragamuffins