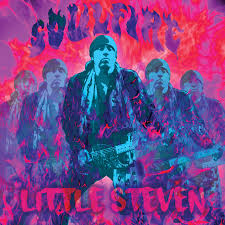 There's far more to Little Steven than Springsteen's sidekick, although my greatest image of him is that. I always thought of The River as Van Zandt's album, I couldn't tell you why, but seeing the E Street Band on that 1981 Tour was a revelation. Of course, he'll be known to others from The Sopranos and his production work, but there are two other reasons why he remains in my heart.

His political conscience is admiral and not just about Sun City, he's never afraid to speak out about justice and fairness.But more importantly for me, he is a great Town Cryer for the new and under appreciated artists. His love of music shines through with his promotion of new bands on his Underground Radio show and Wicked Cool Label. In between all of this, his E Street Band Commitments and work on Lilyhammer, it's time for a new solo album. It's been 18 years since the last one.

Songs he's been involved in as writer, producer or player are revisited and it's an absolute joy. Don't expect it to sound too much like the E Street Band or the Garage Rock / Power Pop he celebrates. Soulfire has more in common with Southside Johnny And The Asbury Jukes, a band intrinsically linked to him, but with even more horns and a real gospel soul tinge.

Five of the 12 tracks are Asbury Jukes related, including the magnificent, I Don't Want To Go Home. There isn't a mass of difference in these five songs, a lot more soul certainly, but you do realise what great songs they are. Love On The Wrong Side Of Town, in particular, sounds incredible, it even has a jingle jangle intro.

Whilst these songs are making me dig out those Southside Johnny albums for the first time in a while, it's away from those where the album gets really interesting. The Doo Wop of The City Weeps Tonight, the Blues Rock of Blues Is My Business. The Shaft vibe on Down And Out In New York City is ace and Gary U.S. Bond's Standing In The Line Of Fire has a Spaghetti Western Intro.


Saint Valentine's Days is turned into a sort of Tom Petty with Horns and the title track comes over all Huey Lewis. As an album, Soulfire stands up on it's own. Most of these songs will be new to people and this is a really coherent album. For those who do know some of Little Steven's history, they will be a reminder of how much history he has got and how great it is. He's criminally underrated as a songwriter and arranger.

More recently, I haven't been listening to this sort of album, it's been boys jangling their guitars. What a fool I've been. I'm off to raid my vinyl and in the meantime, this should certainly be a purchase for you to consider. It's a real feel good album, beautifully done and more than welcome here. I'm looking forward to his show with The Disciples Of Soul in Manchester on 18 June.


You can buy the album at Amazon and everywhere.


Posted by Anything Should Happen at 15:11