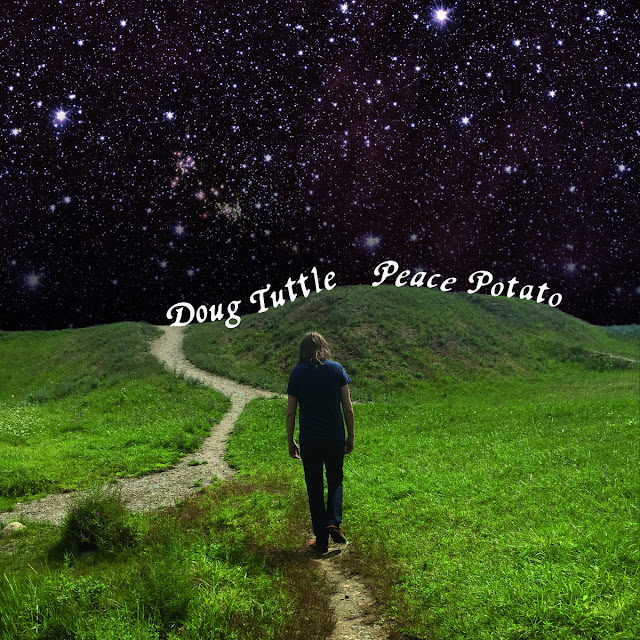 After listening to plenty of noise lately, it's nice to be back in the more mellow territory of Doug Tuttle. His third album is beautifully played, it's great melodic pop with plenty of jangle but firmly in the Psych Pop land of The Orgone Box and such.

That Byrds like Jangle bookends the album with Bait The Sun and You Have Begun and there are hints of George Harrison solo stuff. However in between it's that laid back Psych Pop that shines through. We aren't talking backward guitars and unexpected keyboards, we are talking about how harmonic it all is.


Tuttle is a fine guitarist, both as a straight ahead player and with effects and that talent shines. It makes it more than a lot of what else is around. I hear so many samey or fake Psych Pop that it's noticeable when you hear something done properly and Peace Potato does that.

The album is wonderfully quaint, you can hear the tape being turned off at times and it's as though so many ideas are encompassed that it can give the impression of being a bit under cooked, the songs sometimes feel slightly unfinished, but that's it's charm.

15 songs in 33 minutes might cement that thought, but this is such a great listen that it really doesn't matter. I'd much rather have that than the opposite with three minute ideas extended to six of boredom. The gentleness is really soothing.

By far the stand out is the magnificent Only In A Dream, but there is something for everyone. All You See aches splendidly, Can It Be is very Gerry Rafferty and there are plenty of hints of West Coast Pop.  All in all, Peace Potato is a most welcome offering. Tune In and Chill Out.


Posted by Anything Should Happen at 15:02