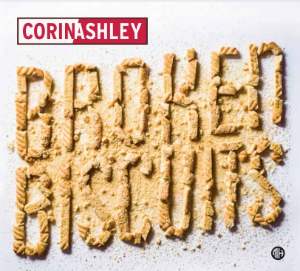 The Pills were an incendiary live band, Mod Pop at it's very best. When Corin Ashley went solo, the results were far calmer as he stepped into territory that he'd always hinted at musically. His second solo  album, New Lion Terraces is Power Pop at it's very best. He managed to make intelligent complex pop dressed up as something dar more simple.

I reviewed that album elsewhere and at the time said it could be the best album of 2013. I've seen heard nothing that changes my mind. In 2015, he collaborated on Martin Carr's magnificent The Breaks album, but his main focus was recording album number 3. It was virtually ready to go, just needing mixing in early 2016.

Then in January last year, Corin suffered a stroke. It took out all of his speech and left him with no movement in his left hand. The next nine months were spent in therapy regaining both movement and speech successfully, so much so that he was able to return and finish the final track to complete Broken Biscuits.

Bearing in mind what Ashley went through, it's prescient that Broken Biscuits was the name of the project of the group of songs recorded before the event. This knocks very closely at my door. The Heart Attack that I suffered late last year led to a very determined physical recovery, but mentally I tracked back to things I was doing before that and unknowingly the mental signs were there. I was strangely putting my house in order which was unlike me and I had no indication of what was to happen.

Enough of all that though, because Broken Biscuits is as good as you'd expect and more. There's a real McCartney feel to the album like. Jellyfish is a good example of this, but there's a real fine pop thread throughout all of these songs.

Little Crumbles confirms this McCartney theory, the opener throws so much into one song that you wonder if there's anything left for the rest of the offering. Thankfully there is and Edison's Medicine adds a touch of music hall that could be Andy Partridge in one of his great arranging moments.


Magpie Over Citadel sounds so Andy Fairweather Low, Inappropriate Fashion could be a Graham Parker song, whilst Junior Partner is reminiscent of Steven Bishop. Ashley's vocal on the acoustic stomp of King Hollow is superb, very Mike Viola like. Powder Your Face is superbly arranged in a Peter Skellern style, all it misses is a Brass Band.

The Stand Out song though is Wind Up Boy. I hear so many supposed XTC comparisons.most of them nothing like the band. On this, Ashley not only fashions up a comparison, he even sounds like Andy Partridge. It also has the bonus of featuring Tanya Donelly on the chorus and with a middle section of her own. The song is an absolute gem.


So what you have is 44 minutes of beautifully constructed pop, made in circumstances that are far from ideal, but apart from the theme you wouldn't know that at all. This is exceptional! You can buy the album everywhere. Some examples are CD Baby for download here and Kool Kat for the CD with a Special Bonus Disc here.


Posted by Anything Should Happen at 14:40