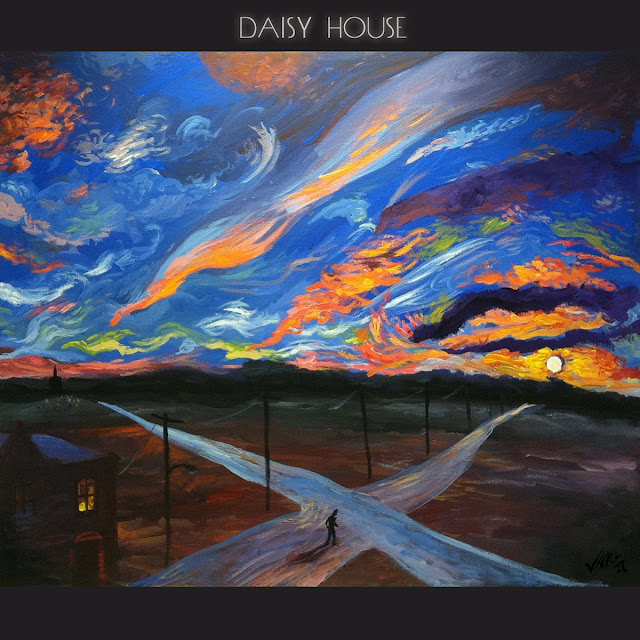 Although I've become more noted for Power Pop over the past few years, it was never meant to be that way. I'd always been known for Glam and New Wave but my collection has always been diverse and grows much to the bewilderment of the Queen Of Burtonwood. I'm as at home with Can, King Crimson, Hank Williams, Mike Oldfield and Jean Michel Jarre as I am with sun three minute symphonies about love lost and found and masses against the classes.

I only mention the above because this Power Pop notoriety means that at times I lose sight of what else is around and there is no greater example of this than Daisy House. Crossroads is album number four and I'm only pissed off because I missed the first three completely. Since my ears have been perked, I've found that the band are friends of the Big Stir crowd which is more familiar territory to me.

Longbeach's Daisy House are a Father and Daughter duo and their influences are far and wide and it shows. Multi instrumentalist Doug is the writer and muse, but daughter Tatiana's voice is something very splendid indeed. The two voices make this album so different, whether it is separate or together. Doug's voice lends itself to latter day Beatlesque Pop. almost Gerry Rafferty. Tatiana however is a sort of Annie Haslam joy. When the mix, sparks fly.

Crossroads is also not just about those voices, the arrangements are great, well thought out and coming from unusual directions. Beloved is a cross between the Psych flavours of late 60's US and Fairport Convention. Leaving The Star Girl is all Byrds Jangle, it could be Teenage Fanclub. The Title Track, Crossroads, has Tatiana and THAT voice in Aimee Mann mode.


Remembering The Arc is very Donovan and more like I imagined the album to be. Albion is very Sandy Denny, Grand Canyon is early solo Lennon. The arrangement on Nocturne is exceptional, the two minutes featuring an operatic voice in the background. The Girl Who Holds My Hand is a gem, probably my favourite track. It's very Elliott Smith, but the harmonies between father and daughter are ace.

Crossroads is a splendid album due to all that I note. The mix of genres, the mix of voices and the quality of the songwriting and arrangements. This is the sort of album that doesn't get made any more and the odd time that one is, it usually suffers from a lack of production or front loading. I can't find a flaw, I love it and urge you to give it a go.

Posted by Anything Should Happen at 16:15