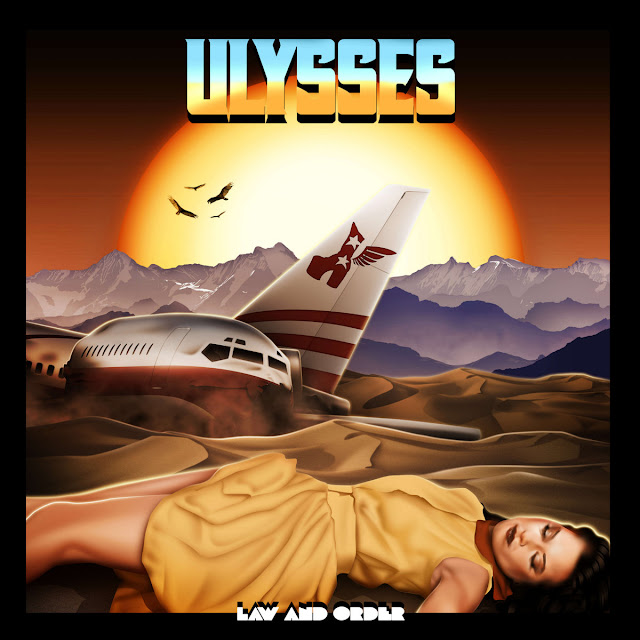 Any of Ulysses's three albums are essential listening. Seeing as we concentrate on the new, Law And Order could be their best ever and it knocks the socks off most of what's around. I'm told that I live in 1975's Pop And Rock excitement. Well if I do this is an ideal example wise. In a field dominated by the U S of A, it's always great to celebrate the better UK bands and Ulysses are certainly one of those.

This year promises to be the best IPO Liverpool ever. You can find details of the line up here. Click on the band names to find more details. You'll be reading more about the Big Stir bands over coming days, but it's also great to see the UK bands in the line up, many of which you'll have seen here and others that you will read more on in the coming months and weeks.


Ulysses are one of the bands appearing and I urge you to catch them. The Bath foursome's brand of Pop Rock gets a bit more rocky than a lot around. I like to think of them as a UK version of Somerdale and lest we forget they came up with one of my two albums of the year last year. Law And Order wears it's influences on it's sleeve without ever sounding derivative ir becoming a pastiche and these boys can play.

There's lots of references that can be made, the album as a whole though keeps dragging me back to Glam Rock. The Glam era is rightly lauded for making music fun and it was largely singles led. Bands struggled to make  albums as strong as the singles, there was a lot of filler and that probably explains why few albums of that era re lauded now.

Ulysses don't have this problem, this is an album and over half of it could be released as singles. The quality never lets up. In fact, my normal practice of embedding three tracks to give you a flavour of the album has been sorely tested. I couldn't narrow it down, so much so that I've gone for four examples.

Smiling reminds me of The Pushbike song, Lady could be Liverpool Express or Jigsaw. Crazy Horses Ride The Snake could be a lost Badfinger tune. Come On This City's Gone is so Thin Lizzy, Dirty Weekend, The Glitter Band and Typical Scorpio is all late 60's Psych Pop. How Long could be sung by Brian Connolly.


There are two versions of Yellow Sunshine, all they share is the same title, both are very different. The second is a cracking slab of 60's Psych, but the first is an absolute gem. It's a real Monkees 60's Pop romp, you'll soon be singing along. A special mention should also be given to the duet on Song That Has To Be Sung. Purson's Rosalie Cunningham duets on what is pure Buckingham Nicks.

I urge to listen to the whole album, you will be as enchanted as I am. Very few albums are such fun, you'll end up air guitaring the solos and singing the choruses. Law And Order is one of those special albums. You feel far better after listening to it and isn't that what music is supposed to be? If you don't appreciate that, you should just enjoy your Ed Sheerhan album and marvel at how banal it all is. This is how music is supposed to be heard.


You can listen to and buy the album here. I'd also urge you to catch the band live and you can find their future dates on their website here.


Posted by Anything Should Happen at 15:23

Email ThisBlogThis!Share to TwitterShare to FacebookShare to Pinterest
Labels: Ulysses