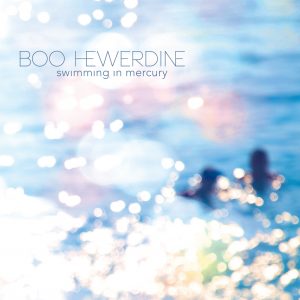 As one of the great UK Singer Songwriters and being as active as he is, it's somewhat surprising to realise that this is his first outing of new material for eight years. I was a massive fan of his band, The Bible, who offered up really intelligent pop and Hewerdine's standing as the 90's progressed was akin to the likes of Neil Finn and Difford and Tilbrook.

More recently, he's been viewed more as a Folk Troubadour, an Acoustic Warrior, and although I can see this, it hasn't necessarily been the case. Although his solo stuff has been more rustic, the pop has always been there on the sidelines, particularly in songs like The Girl Who Fell In Love With The Moon.

The great news is that Swimming In Mercury is unashamedly melodic pop, That melody encompasses all before it. American TV is like Jackson Browne fronting The Beach Boys, a UK Version of The Explorers Club. Satellite Town is pure Village Pop, the comparison this time would be Andrew Gold fronting XTC.

Sleep is McCartney Beatle Pop, Gemini has a wonderful Brass arrangement, This is a really reflective album, a real nod to the past, lyrically and arrangement wise. For all the Pop, the atmospheric, The Year That I Was Born is stripped down and John Howard like, ditto An Athiest In A Foxhole. Only Drinking Alone really points to that Folk label.


Although, Hewerdine's Production Work is always a mark of quality, it really is splendid to hear him back in the realms of pop. This is a joyous reflective album. If the magic of Hewerdine has passed you by thus far, this is a great place to start. It's 40 minutes of heart opening and nodding to the past, but in an optimistic way. Boo has never been one to rest on his laurels and heaven forbid that he should. But this is a pause button and a time for reflection and as such the album works beautifully.


You can buy the album everywhere and you should.


Posted by Anything Should Happen at 19:33