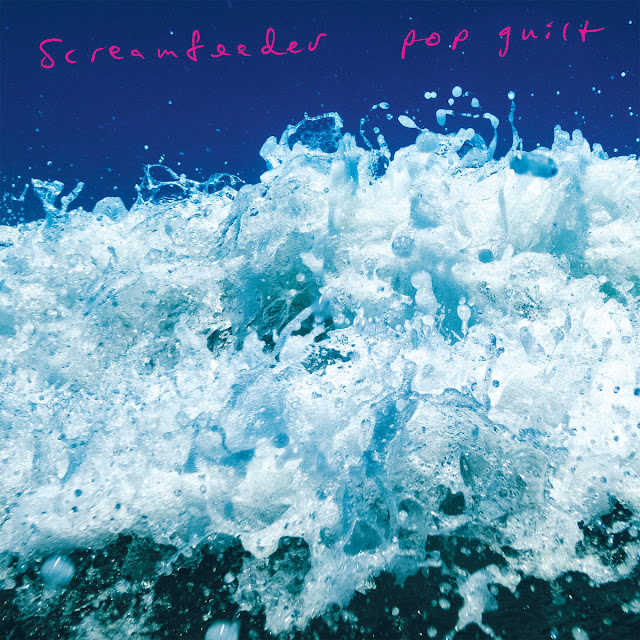 There seems to be a theme recently of bands offering up albums after long absences. Brisbane's Screamfeeder are the latest. Pop Guilt is the trio's first album in 12 years and although it soesn't move massively away from their template, there's more than enough to gather a new breed of followers.

The same influences are there, The Pixies and Husker Du spring to mind. However, Tim Steward's voice has always leant itself to other comparisons. I think Tim Wheeler of Ash, even Norman Blake of Teenage Fanclub.


Bassist, Kellie Lloyd takes over vocals on five of the songs and this changes the dynamic allowing them to explore a different territory, almost Brit Pop Girl or Shoegazing. If Screamfeeder had been a Brit Pop band, they would probably have been Ride.

When I think Brisbane or Australia, I think Power Pop or Garage Rock, there's far more to Screamfeeder than that. Sometimes they can be a heavier version of fellow Brisbane band, Custard, but they don't want to be a lighter version of Garbage. There's some great arrangements here and unusual tempo changes that reveal an intelligence not always revealed in the comparisons.


You sense the pop sensibilities in the background, particularly on the Lloyd vocals, but what grabs you is the guitar breakouts. This mix of pop and nose makes for an intriguing listen, much more than the few bands around who'd tackle this sort of album.

Karen Trust Me is great Power Pop, I Might Have Some Regrets is Gallagher like, Sciatic Heart has a real psych pop backdrop to that sweet female vocal. That mix of boy / girl vocals and the variance in songs like Half Life that make this a fine album. There's enough to keep the older fans happy, but plenty of chances taken to gather a new breed, Pop Guilt is a fine album, there's not too much around that sounds like this. I love it.


You can listen to the album and find out more about the band here.


Posted by Anything Should Happen at 13:15

Email ThisBlogThis!Share to TwitterShare to FacebookShare to Pinterest
Labels: Screamfeeder