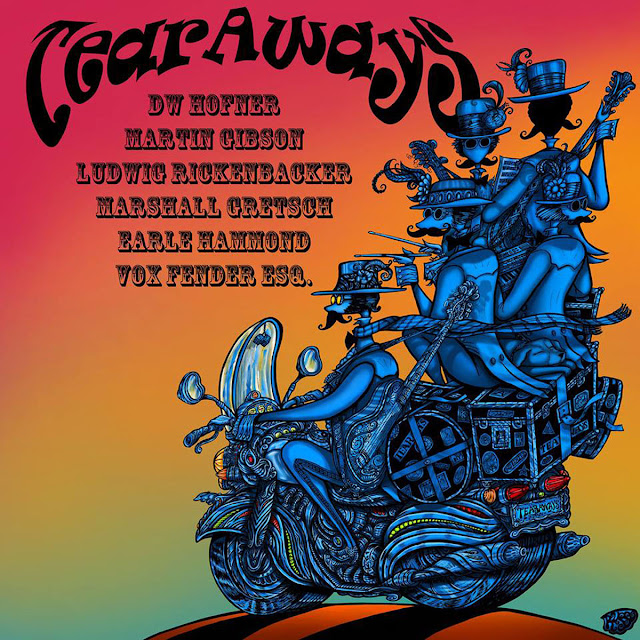 Santa Barbara's The Tearaways have been around for a good while and have been to Liverpool many times. Although they are very much lovers all things Merseybeat, they've been unfairly lumped in with Power Pop from that era. Here they prove how inaccurate that comparison is, the new album is very much in the Pop Rock mould of great Seventies and Early Eighties vintage.

There's been some real thought put into the songs, providing variance and wit. There's a lot here and it doesn't always work, but largely it succeeds because of the energy and joy that the whole album transmits.


This isn't a two bit affair either. Any band with Clem Burke on drums has to be taken seriously and Earle Mankey is involved in the Production. These guys are serious and what they've produced is a mixture of good time sounds with real melody and they've taken chances. All in all, admirable and refreshing.

If I Had It is the sort of call and response song that The Proclaimers do so well, My Bad has a real ache to a sort of Bo Diddley beat before expanded into some great harmonies. That's Rock is like a harmonic update of the Only Fools And Horses theme.

Much Too Old To Feel This Young has a country feel, but in Labelled With Love Squeeze mode. Good Luck Lovin' is a shuffle, I'm Just Trying To Be Nice sounds really Badfinger. Name That Tune is the nearest to Merseybeat that you are gonna find here, but it's more like The Searchers when they became part of the late 70's UK New Wave.

One of the things I'd heard in the past from The Tearaways was an inspired cover of The Ramones' Do You Remember Rock And Roll Radio. It was done in a jaunty Power Pop way with Brass and worked beautifully. This sums up what the band are about really and this offering is a really good listen.

The whole album is a fun packed thing and when I bemoan the likes of Coldplay and their miserable sound it's because of albums like this. Let it show that you are enjoying it and the listeners will too. This ticks all the boxes. The only thing that I'm not sure about is the title, something different, but a bit of a mouthful.


Posted by Anything Should Happen at 16:12

Email ThisBlogThis!Share to TwitterShare to FacebookShare to Pinterest
Labels: The Tearaways