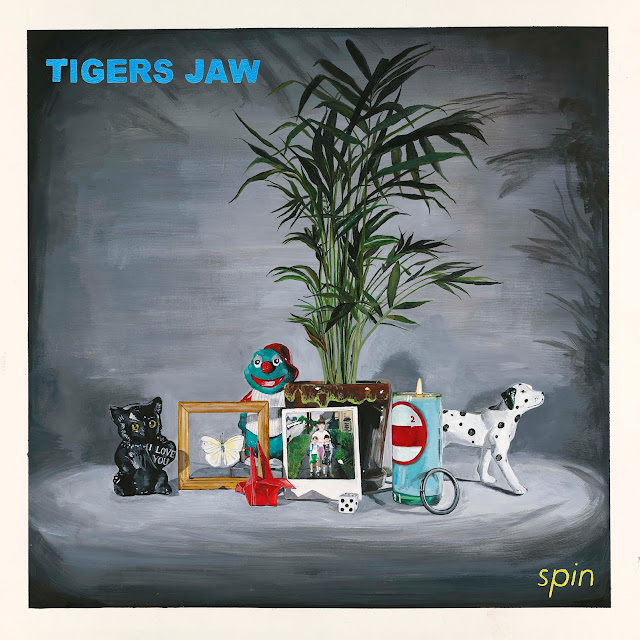 I've always liked Tigers Jaw. In the past, how the Emo / American Punk scene label can be off putting for listeners. At best they expect bands to be Green Day, at worst they associate them with "dudes" on skateboards. That whole scene was wrecked by the majors who wanted the next Dookie and left to suffocate.

Tigers Jaw's last album, Charmer, was a great listen, if a little dark. It coincided with the band splitting with three of the five members moving to pastures new, leaving Ben Walsh and Brianna Collins to pick up the pieces. I was intrigued to hear how Spin would pan out as Adam McIlwee had been a big part of the band.

I'm delighted to say that the outcome is delightful. Collins stepping up as songwriter and co vocalist has brought out all those pop sensibilities that threatened to break out, but previously seemed stifled. Spin is a great Pop Rock, chirpy and optimistic. I'm sure signing to Atlantic Off-Shoot, Black Cement Records will help them forge a much bigger following.

Brianna's vocals on the likes of Brass Ring and Same Stone add a real poptastic feel. FM Girl Rock like on the former, more like Beth Orton on the latter. When Walsh takes over vocals, the songs seem more riff led and feel more Alt Rock. There are Pop Punk overtones on the odd track, particularly Window, but overall Spin sounds far more mainstream.

I suspect that Will Yip's continued involvement has enforced this slight change of direction. I wouldn't want to give the impression that there has been major changes because there haven't. It just seems that Collins's songwriting has emphasised the pop in place of the retrospection of previous releases.

All in all, this is a fine album and one that caught me a little by surprise. It's the best of the past and a real nod to the future. Well done Tigers Jaw!


Posted by Anything Should Happen at 17:23