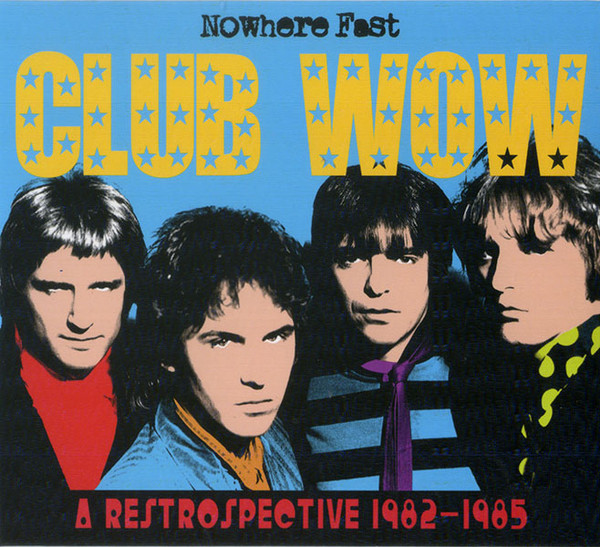 Cleveland's Club Wow are one of the great lost Power Pop Bands. Jimmy Zero had been in The Dead Boys and The Stiv Bators Band. He'd formed a trio with Jeff West From Testors and Billy Sullivan, who is currently in the Peter Noone version of Herman's Hermits. In January 1982, Frank Secich from the legendary Blue Ash joined.

Between 1982 and 1985, the band released one single, but in the search for a major deal, 20 or so songs were recorded in Studios at Paul Pope's Studio in Elyria and all in all 28 were recorded whilst they searched for a deal, came close, but the songs remained unreleased until now.

It's a real shame that these songs didn't get a release, because there is plenty of great Power Pop present. the title track and Terminal Town. There's also a mix of styles as the band developed. Reptile House is a bit darker as a lot of early to mid 80's material was. Whilst, Norman Green is wonderful Psych Pop.

On What's With You, there's a real update of The Who's 60's sound. There's also that New Wave Keyboard sound on In The Night and There's A Fire, almost Devo. Yet It's A Lie is a sweeping ballad, Liverpool Express like.


There are two live performances, Wild Ride Of Vera Jane is great UK Power Pop and may be the best song here, the other a cover of Strawberry Fields Forever. For a band that only released two songs, these recordings are a revelation. I suppose Club Wow suffered from not being IRS like, Post Punk or New Romantic at the time, Many did.

So 18 of these 20 recordings have never been released. I'm delighted that Zero Hour have got hold of them. You can buy the CD with a DVD for the bargain price of 12 Australian Dollars from Zero Hour here.


You can also listen to and buy the album for download here,


Posted by Anything Should Happen at 20:22