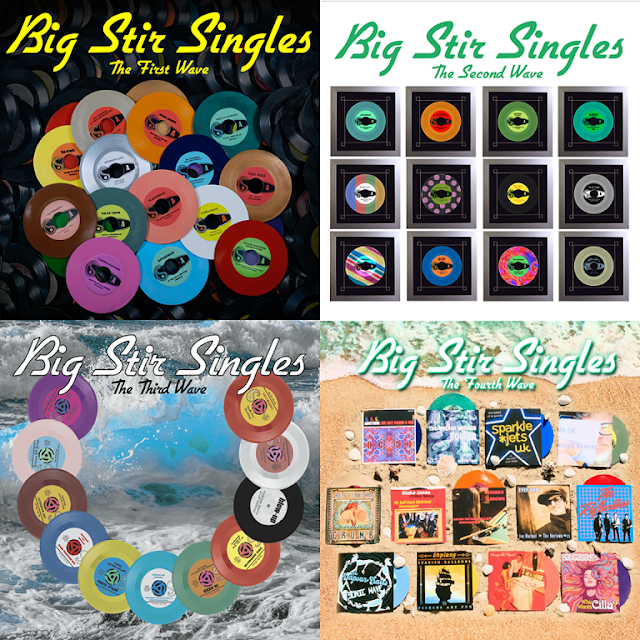 Volume 86 of the Audio Extravaganza is so special that it could be considered to be an Audio Explosion.  The Big Stir Weekly Digital Singles have been an absolute revelation. The 57th single is released tomorrow (20 December) and four compilations have been released featuring the A's and B's of the relevant singles as CD and Download combined purchases.

I've decided to pick my current favourites for Volume 86 of the Audio Extravaganza. I say current because faves change weekly, even daily. Timing meant I could only fit 23 in the mix as there is a 70 minute show limit. The only distinction that I gave was that I would only choose A Sides.

You can find out more and purchase individual singles at the bargain price of a dollar for the two songs by visiting the Big Stir page here. It has been a fantastic year for the Big Stir Label and look out for further news early next year for some joint news concerning Big Stir and I Don't Hear A Single.

A reminder that these episodes are compiled with great care. The aim is to produce a sort of mix tape. Hopefully this will be the soundtrack to your day. I've also learned that if you use the mixcloud player at the bottom of this page, each song title is shown as it plays.

Thanks as always to Jim Moody for his technical excellence. You can listen to the previous IDHAS Audio Extravaganzas on Mixcloud here. Here's Volume 86's playlist that starts with a special intro from The Brothers Steve's Os Tyler and Jeff Whalen.

01 The Brothers Steve - Angeline (With Intro Bumper)
02 Sundial Symphony - Merri Goes Round
03 The Walker Brigade - Tower
04 Armstrong - Love Hate Passion and War
05 Spygenius - If You Go A-Roving
06 In Deed - I'm Alright (When I'm With You)
07 Joe Normal & The Anytown'rs - Don't Hurt Me
08 Librarians With Hickeys - Black Velvet Dress
09 Lannie Flowers - Day Glow All Night
10 Blake Jones & The Trike Shop - My Soft Rock Girlfriend
11 The Armoires - (How Did You Make) A Mistake Like Me
12 The Reflectors - Teenage Hearts.mp3
13 The Vapour Trails - Sonic Wave
14 The Ex Teens - Good News (for Shut-Ins)
15 Blaine Campbell - Happy Faces
16 The Kariannes - This Song Is A Cure
17 Plasticsoul - The Ghost Inbetween Us
18 Karla Kane - Goodguy Sun
19 The Persian Leaps - Catnip For Cupid
20 The Hangabouts - Who Wants Cilla
21 The Tor Guides - Just A Smile
22 Jim Basnight - Never Get Lost
23 mylittlebrother - Love Song For An Island