The Greek Theatre - When Seasons Change 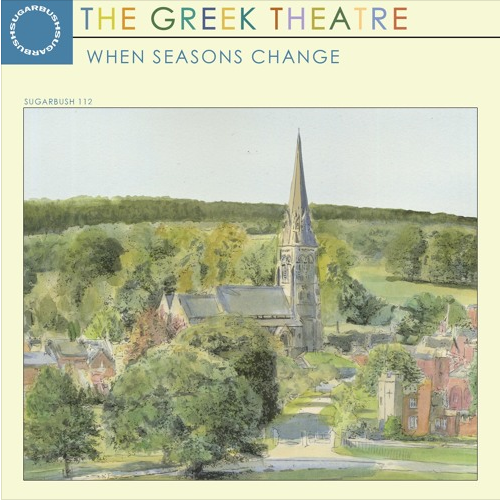 I think one thing that has become apparent about IDHAS throughout 2019 is that it is not a Power Pop Blog. My influences are welded by over 40 years of being involved in different scenes from the Glam Rock of my youth to the largely Indie Pop Rock that I listen to a lot now. If it is good I like it, no matter what the label is. I got a bit tired of receiving emails in 2018 starting with the line I know this isn't Power Pop but....... and that combined with the constant nonsense in Power Pop circles, led me to gently change the focus of I Don't Hear A Single.

Away from IDHAS, the real love of my life is a mixture of Prog and Psych, particularly Psych Pop and I get irritated by people thinking all Psych is hippy trippy backwards guitar monotony. Very much like Punk Pop, when people see the word Punk, they run. For anyone trying to convince sceptics that the Psych World can be joyous, The Greek Theatre are the band to choose.

The Swedish band offer up their third album and each has developed what they do. They specialise in gentle West Coast Psych. All of it is an easy listen and borders on Prog and artists as varied as The Byrds, Pink Floyd and the Alan Parsons Project. Indeed a song like The Streets You Hold is almost Fleetwood Mac until the jangle cuts in. Songs are beautifully arranged and played, it is like being invited into your own personal soundscape.

I'm reminded of Big Big Train at times, who I've always thought are far more than Prog. But don't think that the band have forgotten their roots. The Post-Factual Jam is top notch Psych of the highest order, wonderfully out of kilter with the rest of the album and the Guitar work is mind blowing. Compare that to The Cabooze which is built on some wonderful Guitar, Piano and Flute. Both songs are very different, but both just as rewarding.

A Different Place starts slowly but builds into a sort of Reelin' In The Years West Coast Rock Out. It's this West Coast feel that marks the distinction of The Greek Theatre compared to other challengers in the field. The album closer, Sail Away (Part 2) is a splendid moving five minutes, mixing a mellow Art Garfunkel like vocal with a film soundtrack type arrangement. However, the real killer song is Laurence Of Laurel Canyon with its jaunty Psych Pop arrangement matching an early Journey, Gregg Rolie style vocal.

The Greek Theatre are building up quite a reputation now. Three albums in, they are a mark of quality in what they do. Big Praise too to the continued success of Sugarbush Records. Label head, Markus Holler specialises in a wide range of releases, only releasing albums by artists that he loves. This reveals how much the taste the man has. It is refreshing to see a Vinyl label grow and grow when the majors have got their dollar heads on thinking up the latest pointless Super Deluxe Edition. There really is something galling about the major's marketing of albums as being the first time on vinyl.


You can buy the album directly from Sugarbush here. You should, you will not be disappointed.

Posted by Anything Should Happen at 14:30