Mansion Harlots - All Around A Fairground 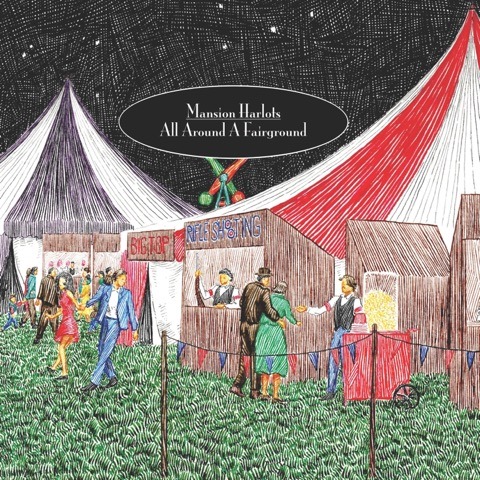 OK. I'm not gonna say it, oh alright I will. Some people who don't have deadlines to hit, release their Best of Year way too early. I've previously given some examples, but here is the main one. Mansion Harlots released their new album this week and it is one of the best Pop Rock albums that you will hear this, or indeed any, year.

Many of you will know of Baz Francis from the wonderful Magic Eight Ball or his solo output. For over a decade and a half, Francis has been releasing what has become an admirable back catalogue, majoring on crunchy Guitar led Pop. Well Mansion Harlots was his first band.

Initially formed in 1997 with drummer Will Gray and a revolving line up, Mansion Harlots disbanded in 1999, but kept working together and in 2017, it was decided to reform the band. Honed by their return to the live stage, All Around A Fairground was completed this year.

I like to think that I know what is going on, so when I get caught by surprise by an album, it is more than welcome. This album reminds me of how I felt when I heard Somerdale's Shake It Maggie, so much so that Tale Of The Same Old Story could be interchanged between both bands.


What does shout out here, is the sheer melodic quality of the material. I knew Francis could sing and his guitar playing is exemplary, but this is up another level. The quality never lets up and here's hoping that the commercial quality finally gets the credit that it deserves.

All bases are covered from the Don Henley-ish Until We Work It Out Tomorrow to the Riff Rock of Come Back For More. Meet Me In The Shadows reminds me of a calmer JJ72, until it goes all Fleetwood Mac in the chorus. Lover, What D'ya Put Me Through? is Power Pop of the highest order.

Happier Alone is a real American Soft Rock singalong and Panda Eyes is 80's Film Soundtrack material. You could pick any of these 12 songs to be a single. All Around A Fairground is Pop Rock of the highest order. I can't recommend it highly enough.


The album can be bought as a download on Amazon Music or Apple i-Tunes. You can buy the CD here and find out more about Mansion Harlots here.

Posted by Anything Should Happen at 23:17