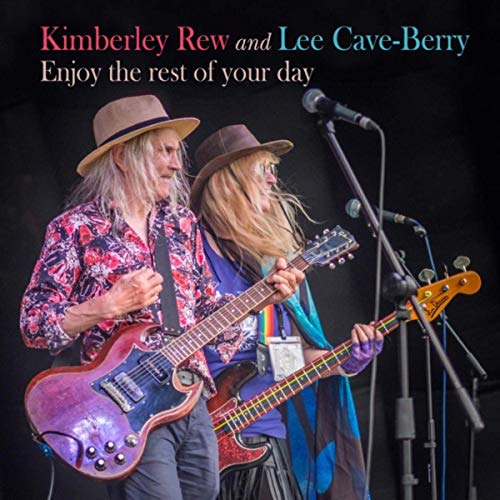 I'm a massive Kimberley Rew fan. It's not because I should wear the badge because of The Soft Boys and Katrina And The Waves. It's because his solo career is one of the most under rated of all time. Rarely have I been disappointed by his solo output. He's not just one of the great Guitar Pop writers of all time, he also has the ability to cast his hand to whatever genre needed or fancied at the time.

His debut album with wife, Lee Cave-Berry is no coasting affair. If Enjoy The Rest Of Your Day was released by Nick Lowe, people would be wetting themselves and fans of the Jesus Of Cool should bear this in mind. It would fit beautifully in their collection. Where as Lowe as recently said his career has been rekindled, Rew's never lost it's flame.


I think people know my feelings on Americana and what it has become, a catch all for mediocrity, but any time the pair stray into that area, it's beautifully done and usually acoustic. There's a real wit to the lyrics at time, none more so on the Glam Rock of Sister Cow.

Cave Berry's vocal on Backing Sweet Blues is pure Nashville and Flat Cat is well into Stray Cats territory. All across the album, there's a hint of Rockpile, particularly Rock n Summertime with some great twanging guitar.

Some Days You Eat The Bear has a funky disco backdrop and The Lady Is Dynamite is party time. This is no Walking On Sunshine, although the choruses are as catchy. Why would you want it to, far fewer are making albums like this? You'd pay the admission just to hear Rew's Guitar playing.

The Rock and Roll count is high, as are the lyrical surprises. It's a pleasure to listen to 14 songs that cheer you up, particularly with what's going on politically. Husband and Wife give the impression that they enjoyed making this as much as I did listening to it.


You can buy the album from CD Baby and everywhere else. You can find out all about Kimberley Rew here.