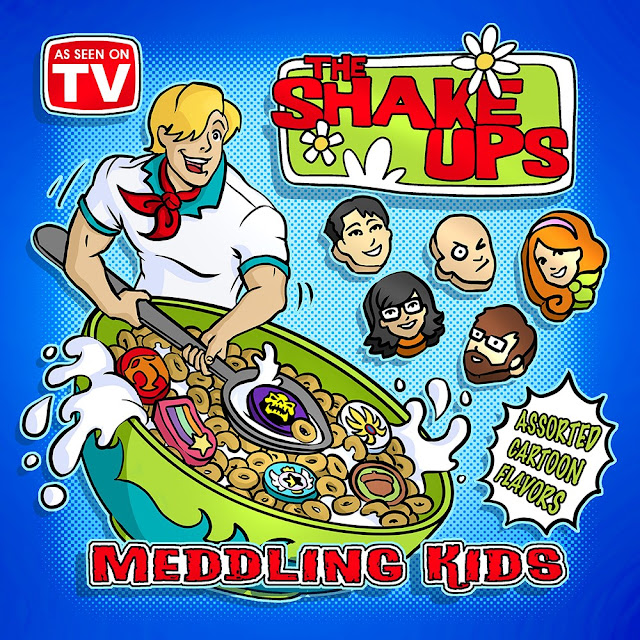 Indianapolis's The Shake Ups have been around for a decade and a half, but it's since 2013 that they hit upon a formula that mixes Power Pop and Bubblegum that appeals to both Kids and the Power Pop Community.

Very much like They Might Be Giants, their appeal takes them to School Education, whilst also being melodic enough to gather an Adult Following. After starting with My Little Pony, the band have more recently hit the Saturday Morning Cartoon following, particularly Scooby Doo fans. This has resulted in Meddling Kids.

The Shake Ups do deal in kitsch, but the fact that these are original songs, there is a fine line between Nostalgia and originality. The likes of Masters Of The Universe and Thundercats join in with the Scooby Doo fun.


There's a lot here to like, the Title Track borders on Psych Pop and as a stand alone song it's really good. Robot Arm is very TMBG, Friendship is all Rachel Sweet, Epic Summer Romance is a Bluesy Girl Attitude shout out. Cosmic Sandwiches is a 70's Pop Rock Ballad dedicated to Shaggy.

All the songs don't always work, but most do and it's at best when it's aimed at Scooby Doo. The cover of the Mystery Incorporated theme with Character Intros is great. The Shake Ups can play and this is better than a lot of more serious Power Pop.

Scooby Doo has gathered a lot of fans across it's 50 Years and most of the latter day incarnations have been spot on in gathering a new young audience. The album will appeal to all who have loved the cartoon throughout it's life cycle and also grab a fair number of Power Pop and Pop Rock fans.


The album is available everywhere. You can find out more about The Shake Ups here. Meddling Kids is a great listen, particularly when accompanied by a bowl of Scooby Snacks.

Email ThisBlogThis!Share to TwitterShare to FacebookShare to Pinterest
Labels: The Shake Ups