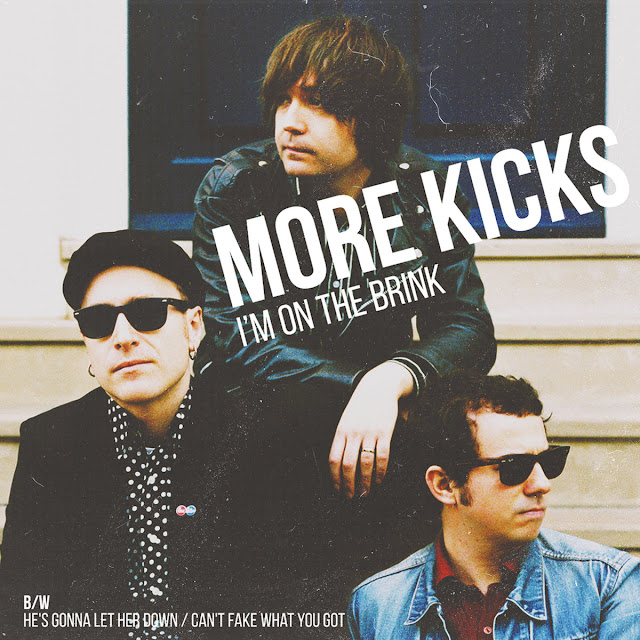 I haven't been covering as many EPs over recent times. The only reason is that there are so many great albums around and much less time. That'll change next month with the start of a Monthly EP feature as this has been a bit of an IDHAS weakness. Singles get covered by the Audio Spectacular Volumes and albums via here, so we need to sort in between.

I certainly hadn't planned to cover EP's during the June Review A Day thing, but I really wanted to tell you about More Kicks for a number of reasons. Firstly, I love these three songs and I've already played I'm On The Brink on one of the I Don't Hear A Single Volumes.

I've been a big critic of the UK Power Pop and Pop Rock scene, it's treated like the runt of the litter over here. Shindig thankfully cover a bit of genre, but it still appears very US-centric at a time that Europe is bursting out with talent. Indeed, More Kicks are heading to Spain as most decent bands who do Pop with a Guitar appear to be doing.


Apart from IPO in Liverpool which goes on too long and hoovers Power Pop up to leave the other 11 months empty, there's not much. The Music Industry is so London based, yet IPO doesn't do Liverpool, thank goodness for the Spygenius gang.

IDHAS were on The Speedways album early and it's really pleasing to see the band grow and that a second album is planned. I digress though, so back to More Kicks. The Trio are London based, but are a multi national affair, representing England, Poland and Brazil. Coincidentally, the band's drummer, Kris Hood is also the live Drummer of The Speedways.

I'm On The Brink is a fine EP, proper Power Pop. The title track has everything you'd want from a PP song, hooks aplenty. He's Gonna Let Down is a real mix of 70's New Wave Pop and the UK in 1964. Can't Fake What You Got is a sort of Mod Psych Pop.


Three very different songs promise lots for the future and hopefully the Brighton Support slot with Autogramm will bring a raft of new fans. This EP is such a refreshing listen and a special mention must go to the wonderful German label, Wanda Records.

The label has a reputation for Punk when there is far more to them than that, Wanda provide some real finds for those willing to look. The other joy of More Kicks is that they do the whole New Wave Power Pop thing. Badges, T Shirts, 7 Inch Singles can be bought at their Bandcamp site here.


You can listen to and buy the I'm On The Brink EP here. You bloody well should!
Posted by Anything Should Happen at 18:59